Wearing blue distressed jeans, mustard yellow t-shirt and a green toned plaid shirt, the Nawab of Pataudi is looking as young as ever. The blue hued background of the poster has tall skyscrapers and surely indicates the movie might have something to do with international locations. 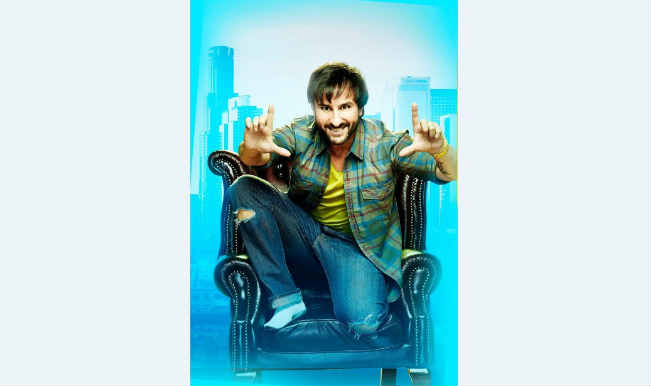 After tormenting us with his role in Sajid Khan’s cinematic disaster Hamshakals, Saif Ali Khan was out of news. There were reports of the actor turning producer with Arif Ali’s (Imtiaz Ali’s brother) Lekar Hum Deewana Dil, introducing Armaan Jain for the first time. Unfortunately, the movie bombed badly at the box office and also received negative critical response. Also Read - Sooryavanshi's 3rd Friday Collection is More Than What Bunty Aur Babli 2 Has Minted on Its First Day at Box Office

But, Saif is now back with a bang with his upcoming flick Happy Ending. The first look of the movie is released and it shows Saifu posing on a sofa, flashing a happy smile. By the looks of the poster you will feel that the Humshakal star is trying to strike a picture perfect pose -a la a seasoned film-maker. Also Read - Bunty Aur Babli 2 Movie Review: Thank God For Rani Mukerji Nahi Toh Thagg Liye Jate!

Wearing a blue distressed jeans paired with a mustard yellow t-shirt and a chequered shirt, the Nawab of Pataudi is looking as young and charming as ever. The blue background in this visual has tall skyscrapers which surely indicates the movie might showcase some international locations.

We hear that Happy Ending is all about Yudi (Saif Ali Khan) who is a Hollywood writer. The movie takes a dig at various aspects, including  love, marriage, friendship and…ahem ahem a happy ending!

The teaser has not really teased or excited us enough. But we are sure Saifu will showcase his charm in the days to come with more posters and the trailer, of course!