Very rarely do cine-goers get to see a movie that charms them with its simplicity coupled with the sincerity of those who make it. Director Vibhu Puri's Hawaizaada is one such endevour  that reta 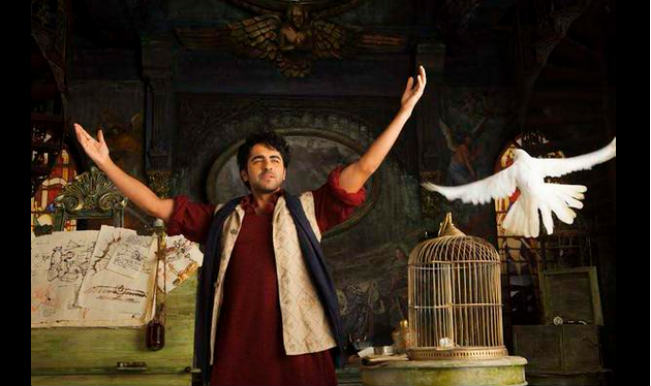 Very rarely do cine-goers get to see a movie that charms them with its simplicity coupled with the sincerity of those who make it. Director Vibhu Puri’s Hawaizaada is one such endevour  that retains the essence of the simplicity of  narration without going overboard. The Ayushmann Khurrana, Pallavi Sharda and Mithun Chakraborty starrer should be appreciated for venturing into the zone not many would dare to tread into. Hawaizaada is indeed an ambitious film that rides as much on on the performances of the lead actors as it does on the scale and the design. The makers of this beautiful looking endevour have their hearts at the right places, one must say. Ironically, good intentions alone don’t make an outstanding movie. Vicky Donor, Ayushmann’s debut film, for an instance, was a remarkably daring scrip that was portrayed on celluloid with remarkable deft by the director. Hawaizaada, unfortunately is an ambitious script (which is bolstered by the earnest performances from its actors) sadly, it is not equally complemented by the indulgent screenplay and abrupt editing. It surely has it moments that will  make you giggle. It also succeeds at warming the cockles of you heart. But it fails to take off to the flight of imagination the scale of this venture promises. Also Read - Ayushmann Khurrana Promises an Exciting Year With THESE Films

The year 1903 has assumed historical significance for the legendary Wright Brothers crfated the world’s first airplane in this year. Interestingly-and factually speaking-this feat had already been accomplished by a Maharashtrian, more specifically by an Indian, back in 1895-that’s like good 7-8 years before the Wright brothers proved that man could actually fly. And that’s the story of  Hawaizaada. Meet Shivkar Bapuji Talpade (Ayushmann), the long forgotten scientist who was known for having created India’s first unnamed aeroplane. The dimpled star portrays the genius on celluloid. Pallavi Sharda-who was last seen in Ranbir Kapoor starrer Beshram will play Khurrana’s love interest.

Hawaizaada seems interesting with Khurrana playing a young scientist who is also a dreamer. With his curly mop of hair and quirky avatar Khurrana charms you. He plays this dreamer who is charged with the courage of his conviction that he can craft something that surely is beyond the realms of human dreams. He faces a set of hurdles and innumerable challenges to convert his dream into reality. Even the colossal British Empire is against the man’s overpowering ambition. The westerners fear  that an Indian could cash in on the flight of imagination even before they start entertaining the ambitious idea. Will the man take the leap of faith and succeed at this unimaginable endevour? You have to watch the movie to get the answer.

What sizzles? The first thing that strikes you about Hawaizaada is its lofty scale. The details and  the diligence that has been put into constructing the 1895 Bombay is quite amazing. The plot fosters ambition, nationalism and the power of imagination. The story captures the ethos of the era it is set in quite remarkably.

What fizzles? Music is a huge letdown. Surprisingly, we could not find ourselves-or anybody else-humming any song from the movie after leaving the dark room. Much like Talpade’s initial attempts to fly the plane fall fat, the plot never really picks momentum and you simply wait for the flight of imagination (and entertainment) to take off. Lousy, laborious screenplay coupled with abrupt editing makes Hawaaizada a rather long watch.

Performances: It is hard to dismiss Khurrana’s on-screen presence. He is charming, endearing and vulnerable, all at once. He is definitely evolving with the craft of acting and the efforts he puts into becoming the character he portrays shows. Mithun has yet again impressed us with his effortlessness. The man slips into the skin of the character of Talpade’s mentor with ease. Pallavi Sharda has the grace and serenity her character demanded.