Salman Khan made a starry entry at Baba Siddique’s Iftar party with Katrina Kaif by his side. His reported lady love Iulia Vantur missing in action at the do. At the party, Salman was seen bonding well with his ex-flame instead! Iulia’s absence triggered talks about Katrina and Bhaijaan’s growing closeness. But let us tell you that things are not as they are appearing at the moment. (ALSO READ: Salman Khan attends Baba Siddique’s Iftar party with Katrina Kaif and not Iulia Vantur?)Also Read - India's Most Searched Personalities on Internet 2021: From PM Modi, Aryan Khan To Sidharth Shukla Know Who Topped List | Watch Video

While Salman was chilling at the Iftar party thrown by the politician, Iulia was busy bonding with her to-be sisters-in-law, if rumours of their wedding are to be believed. Yes, the Romanian beauty is often spotted with the Khan‘daan’ of late. Recently, she was again busy with Salman’s sister Alvira Agnihotri, apparently making arrangements for a special event for Being Human. Also Read - Vicky-Katrina's Super-Hyped & Secret Wedding Triggers Hilarious Memes on Twitter | 14 Best Ones 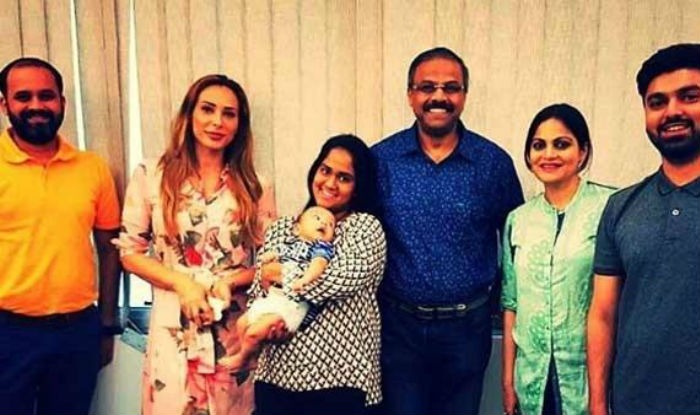 Salman Khan’s brand Being Human is planning to launch its jewellery collection soon. The launch party will take place in Mumbai and Iulia is taking care of the preparations. She was spotted at the Being Human office looking after the same. She also posed for a picture with Arpita Khan and Alvira Agnihotri, Salman’s sisters. You can see Aprita posing with her cute son Ahil Sharma, who has already become an Internet sensation, in this picture. (ALSO READ: Here’s how Salman Khan wooed Iulia Vantur after attending Baba Siddique’s Iftar party with Katrina Kaif!)

It is evident that Iulia is already a part of the Khan family and has won their hearts. Now we are keenly waiting for Salman to make it official with her, although both have denied any plans of getting married.