Hichki Actor Leena Acharya Passes Away Due To Kidney Failure.

Actor Leena Acharya, best known for her role in Hichki and Class of 2020, dies of kidney failure in Delhi on Saturday. Her Seth Ji co-star Worship Khanna told the Times of India, “The actress was suffering from kidney ailment for the past one and half years. Her mother donated her kidney a while back, but she didn’t survive. I knew she had health issues in 2015. She was surviving on one kidney and working. She had suffered many health ailments in between and in past four months her health had deteriorated a lot. She was an experienced actor and I will remember her forever.”Also Read - Teachers' Day 2020: Top Bollywood Movies That Celebrate The Essence of Teachers-Students Bonding

My last conversation with Leena Acharya…..May your soul Rest in Power @leenaacharya2 An amazing actress a hustler, one who would apply and go regularly to every audition I would share with her. A beautiful soul. #RIPLeenaAcharya #Actress pic.twitter.com/WIRTxkGKEm

Also Read - Google CEO Sundar Pichai Recalls Days of Struggle, Says His Father Spent a Year's Salary on His Flight Ticket to US

Leena had shared her last Instagram post on November 3, 2020. She has shared her picture in a pink saree teamed up with jewellery and makeup. Also Read - Rani Mukerji: Hichki Began my Phase 2, it Broke Stereotypes Around a Married Actress

Her co-star Rohan Mehra took to Instagram to mourn her death. He wrote, “Rest in peace @leena_acharya20 ma’am. Last year this time we were shooting for Class of 2020. Will miss you.” 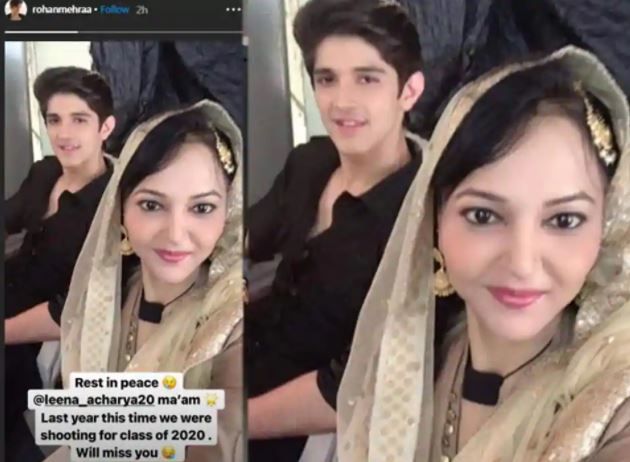 Leena Acharya was part of shows such as Seth Ji, Aap Ke Aa Jane Se, Meri Hanikarak Biwi and Class of 2020 among others. She also starred in Bollywood film Hichki.