The actress is quite active on the social media and often shares moments from her personal life.

It is so refreshing to see the quintessential bahus of Indian television ditch their traditional avatar and don something as refreshing as the ones by actress Hina Khan. Hina who is popularly known as Akshara of one of the popular daily soaps on the small screen, ‘Yeh Rishta Kya Kehlata Hai’ shared few pictures on Twitter, showing off her sexy side in ravishing swimsuit. Also Read - Hina Khan Looks Like A Tropical Queen in Rs 57K Asymmetric Crop Top And Skirt

Hina has shared series of photographs on her micro-blogging account for her fans and followers. It has the gorgeous lady dress up in beachwear, swimsuit in rhythm with the beautiful beach atmosphere. These personal pictures will definitely leave many of Hina’s fans in shock as they have been so used to seeing her as the traditional Akshara over the years.

Nevertheless, the actress is quite active on the social media and often shares moments from her personal life. Hina, born on October 2, celebrated her 28th birthday had shared pictures from the birthday while thanking her thousands of fans, who wished her well being. 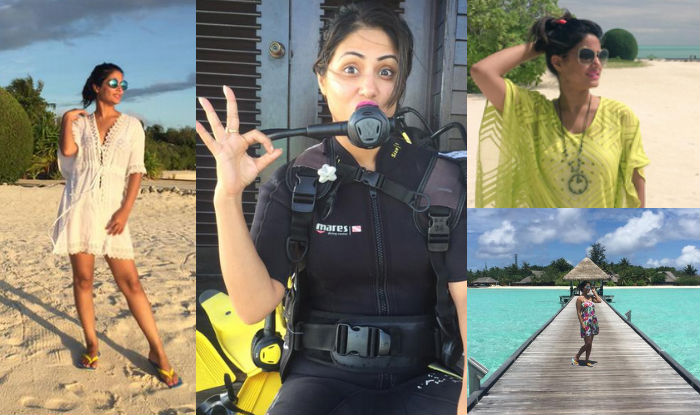 On the career front, Yeh Rishta Kya Kehlata Hai is maintaining its rock-steady position as one of the most watched out shows on TV. The family drama currently witnesses the marriage of Rashmi and Sameer. Akshara will be seen performing a beautiful dance number on their wedding. The viewers will be in for a cute surprise as Akshara and her on-screen husband Naitik (played by actor Karan Mehra) will get married for ‘third’ time. Yes, stay tuned to ‘Yeh Rishta Kya Kehlata Hai’.