Joe Jonas shares real reason about spontaneous Vegas wedding,, This is What he Said!

Game of Thrones actor Sophie Turner and singer Joe Jonas got married in 2019 in an impromptu wedding in Las Vegas. Now, Joe has revealed the reason behind their spontaneous parents. Speaking to GQ magazine, he revealed that they had to get ‘legally married in the States’. He said, “So we thought it would be really fun to get all of our friends, invite them out (to Vegas), and do an impromptu wedding. And we actually had some people that I didn’t even know that well there. Some people (in attendance) I am now closer with! Khalid was there! That was cool. And Diplo decided to livestream the whole thing.”Also Read - Joe Jonas Reveals Plans For His First Wedding Anniversary With Sophie Turner

Joe said he and Turner had to face consequences when his parents found out from the news about their impromptu decision. “My parents called me the next morning and they were like ‘Did you just get married?’ And I realised that I told everybody, but forgot to tell my parents. So, kids, make sure you tell your parents when you’re getting legally married!” Also Read - "Priyanka Chopra is The Biggest Thing in India," Says Sister-in-Law Sophie Turner

Happiness begins with you, bub 🌹 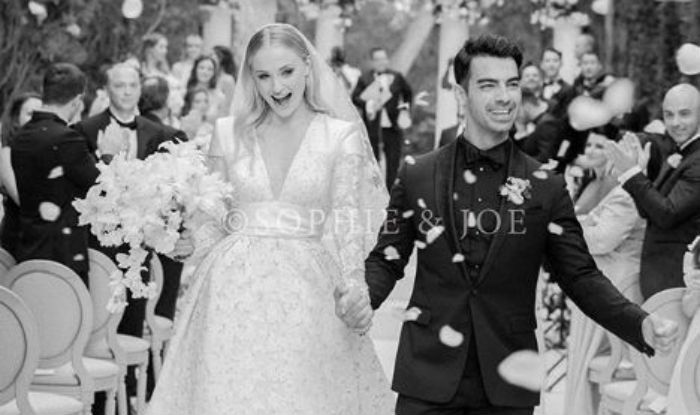 Their pre-wedding ceremony pictures also went viral on the internet. In the pictures, Joe was seen holding Sophie’s hand as they walked around the venue. Joe looked dapper in a striped black suit and a white shirt while Sophie looked magical in a simple white silk dress. Later the day was followed by a party where the newlyweds looked magnificent as they twin in red.