‘I Love my Country’! Diljit Dosanjh Postpones His Houston Show After FWICE’s Letter

Punjabi singer and actor Diljit Dosanjh, who is on a musical tour, has postponed his concert in Houston that was scheduled to take place next weekend after the controversy erupted regarding the Pakistani organiser. The 35-year-old posted a statement on Twitter where he has mentioned that he ‘just became aware of a letter issued by the Federation of Western India Cine Employees (FWICE)’. He further stated that his contract is only with ‘Shri Balaji Entertainment’ and clarified he has no dealings and agreement with anybody ‘mentioned in the article or Federation Letter’. Also Read - FWICE Warns Diljit Dosanjh Against Performing in The US at Event Promoted by Pakistani National

He also mentions that in the ‘lie of the letter by the FWICE’ he has decided to postpone his Houston show. He concluded his statement with ‘I love my country and will always stand for the greater interest of the nation’. Also Read - Diljit Dosanjh is Over Kylie Jenner, Crushes Over THIS Hollywood Singer

Earlier, The Federation of Western India Cine Employees (FWICE) issued a letter to Diljit to warn him against performing in the US on September 21. The reason cited was that the show is being promoted by Pakistani national Rehan Siddiqui. In the letter, which is addressed to Diljit and the ministry, the federation mentioned that they want the singer to ‘cancel his commitment in the interest, sentiments and dignity of the nation.’ 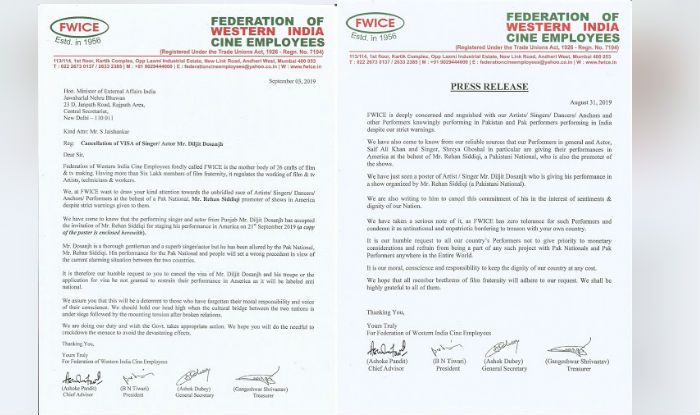 “FWICE is deeply concerned and anguished with our Artists/ Singers/ Dancers/ Anchors and other Performers knowingly performing in Pakistan and Pak performers performing in India despite our strict warnings. We have also come to know from our reliable sources that our Performers in general and Actor, Saif Ali Khan and Singer, Shreya Ghoshal, in particular, are giving their performances in America at the behest of Mr. Rehan Siddiqi, a Pakistani National, who is also the promoter of the shows,” the letter mentioned.