I Need to Breathe: Sooraj Pancholi Feels Suffocated, Quits Instagram, Deletes All Pics Except One

Sooraj Pancholi quits Instagram: Will see you someday when the world is a better place.

Actor Sooraj Pancholi, who has been dragged allegedly in the Sushant Singh Rajput death case has quit social media platform Instagram. Taking to the app on Friday, Pancholi posted his last Instagram story. He wrote, “See you Instagram! Hopefully will see you someday when the world is a better place. I need to breathe #suffocated (sic),” along with a broken hearts and folded hands emoji against a black background. Also Read - Kriti Sanon Was Very Much in Relationship With Sushant Singh Rajput, Claims Lizaa Malik

Sooraj deleted all his pictures and kept one single post from 2018. He even shared a post welcoming CBI for taking over the SSR death case. Also Read - Sushant Singh Rajput's Madame Tussauds-Like Wax Statue Inaugurated in West Bengal's Asansol 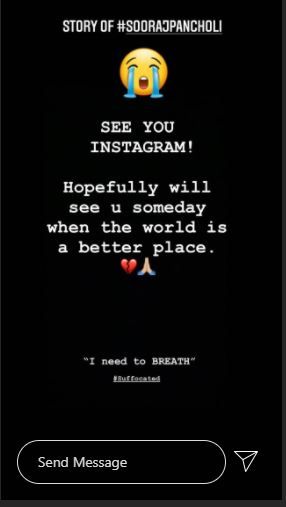 On August 10, Pancholi filed a police complaint at the Versova Police Station against people who harassed him and carried out unverified news reports linked to Disha Salian and Sushant Singh Rajput’s death cases. As per the source close to the actor, he had filed a complaint against certain sections of media, YouTubers, and some other people for spreading conspiracy theories and fake news on social media.

Sooraj Pancholi, who is already fighting a battle of perception in the Jiah Khan suicide case for years, earlier said that he is not associated with either Disha or Sushant and taking his name in various conspiracy theories is only harming his family. Sooraj said that he doesn’t know if SSR was killed or he died by suicide by the people who are targeting him in the case definitely want him to end his life.

Sooraj said, “I have done everything possible to get my first film. So, this is my passion and I’m not going to give up that easy. And these people who are talking about me should have some sense and should have some kind of humanity. Because yeh fair nahi hai. They are destroying my life. I don’t know whether Sushant committed suicide or not. I don’t know. But these people will definitely drive me to commit suicide. I would like to say that”.