It is sad that such a popular Hollywood franchise this time has presented more of a hurried film. Read our review of Ice Age: Collision Course.

With much excitement, this reviewer went to watch the paid preview of Ice Age: Collision Course. After all, it’s the Ice Age franchise! And also to see the response to the film from an equally eager audience. But the excitement was until the mandatory ‘interval’ only. After that, the film promises to soar but goes downhill. It is sad that such a blockbuster franchise this time has presented more of a hurried film. The script could’ve been better, tighter, more appealing. Also Read - Britain to be Hit by Mini Ice Age by 2030, Predict Scientists

We thought we’ll be in alien land, but the flying saucer is all you get to see with Scrat and his favourite acron, and some shots of space, meteors, planets and stars. Haven’t we seen that before? Well, that is a question you may ask at several places in Ice Age 5. Like Manny sitting with his friend and whining that he “doesn’t understand women”. Also Read - Showbiz weekly roundup: Pakistani internet sensation Qandeel Baloch dies; Katrina Kaif debuts on social media! 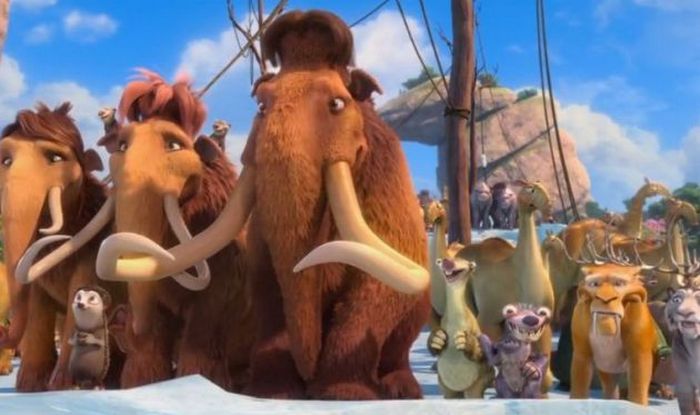 But of course, Ice Age 5 keeps its fun intact where it is expected, with all the usual characters. And oh, apart from the Big Bang Theory turned upside down, there is also a wedding. (Every other Bollywood film has one.) So, little Peaches is all grown up and getting married to this ‘dude’ who is not liked by the papa-in-law-to-be Manny for being too ‘bro’. The film traces their journey of acceptance through the story of collision course, and how Manny finally lets go of his beloved daughter (kanyadaan).

And oh, Buck makes a delightful comeback to help the Ice Age people save themselves and the world from the meteor shower and doom. And also save them from some dinosaurs who are the villains. In the process, Buck and his team discover a new land inside an asteroid and some strange people who haven’t aged for 300 years! But all that is part of the fun, and it is among these people that Sid finds his lady love, who is actually probably 200 years old. No wonder she hits on him first.

Will the gang save the world? Well, that’s predictable. And then there’s the wedding of Peaches, of course. Thank God there weren’t Bollywood songs in the background.

Ice Age: Collision Course maintains its usual family story but falls short of the emotional quotient that made the earlier films of the equal so good, apart from the super fun scenes. The dialogues are also funny but sometimes trying to be too funny. The kids in the cinema hall just didn’t get the jokes aimed for adults. These children, who had accompanied their mommies, spent time playing and jumping around in the second half of the film. One has not seen that happen in Ice Age, Kung Fu Panda or any such franchises earlier.

The 3D animation and some fun moments that are a hallmark of every Ice Age movie are good. The imagery is spectacular but after having seen so many Hollywood films with good visuals effects, Ice Age: Collision Course leaves us wanting for more. The voiceovers by Ray Romano, Queen Latifah and Neil deGrasse Tyson work well in the English version of Ice Age; the Hindi one has Bollywood actor Arjun Kapoor lending his voice.

Ice Age: Collision Course is a very average watch and doesn’t quite make its place into your heart. But we know you would rather take your kids to this film than the adult comedy Great Grand Masti this week. So Ice Age 5 will make its money. The other option is Salman Khan’s blockbuster Sultan, of course – probably more entertaining for some kids.

Let us know if you agree with our rating of two stars out of five for Ice Age: Collision Course!