The Kangana Ranaut-starrer was up against "2 States", "PK", "Haider", "Highway" and "Mary Kom" for the Best Picture trophy. 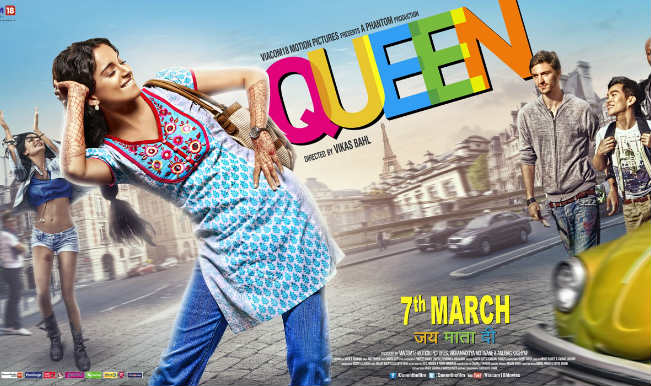 The Kangana Ranaut-starrer was up against “2 States”, “PK”, “Haider”, “Highway” and “Mary Kom” for the Best Picture trophy. The actress didn’t turn up to collect her trophy for Best Performance in a Leading Role – Female, so the film’s director received the award on her behalf. Bahl, however, lost the award in the Direction category to Rajkumar Hirani, who took home the trophy for “PK”. Also Read - Kangana Ranaut Blasts Sanjay Raut as he Gets Accused of Harassment by Film Producer, Says 'Proven Right'

In the Leading Role – Male category, Shahid Kapoor, who also performed at the award ceremony, hosted by Ranveer Singh and Arjun Kapoor, walked home with the award for his performance in “Haider”. He had strong contenders in Aamir Khan (“PK”), Hrithik Roshan (“Bang Bang!”), and Shah Rukh Khan (“Happy New Year”).

Hrithik might have lost the award to Shahid, but his “Bang Bang!” act with a bhangra twist won hearts of many, including Deepika Padukone, who was felicitated with Woman of the Year award. She was also nominated in the Best Performance in a Leading Role – Female.

“Main Tera Hero” star Varun Dhawan won an award for the Best Performance in a Comic Role. The film’s director and his father David Dhawan received the sun-inspired trophy on his behalf. The Best Music Direction trophy went to the popular trio Shankar-Ehsaan-Loy for “2 States”. Other contenders included Mithoon (“Banjara”, “Zaroorat” and “Hamdard”) and Ankit Tiwari (“Galliyan”), for which he won Best Playback Singer – Male.

In the female category of the award, the “Baby doll” singer Kanika Kapoor (for the film “Ragini MMS 2”) got over competition from Sultana and Jyoti Nooran for “Patakha guddi (“Highway”) and Shreya Ghoshal for “Samjhawan” (“Humpty Sharma Ki Dulhania”).

It was a big night for “Heropanti” actors Tiger Shroff and Kriti Sanon, who both won trophies for Best Debut. They were both handed over the trophies by their idols. While Tiger was given the award by Hrithik, Kriti looked thrilled to get the trophy from Anushka Sharma, whom she looks up to.

Tiger and Hrithik also did a few moves together on the stage, while Ranveer and Arjun tried to follow them. National Award-winning director Omung Kumar got the Best Debut Direction award for “Mary Kom”. He shared it with popular producer Sajid Nadiadwala, who made his directorial debut with “Kick”.

It was an emotional moment when the award for Outstanding Contribution to Indian Cinema was announced. The showman, Subhash Ghai, got on stage to receive it from Anil Kapoor and Jackie Shroff, whom he worked with in the 1989 movie “Ram Lakhan” and more. Shraddha Kapoor also paid tribute to Ghai by performing to songs from his films like “Taal” and “Kisna”.

“I grew up dancing on ‘Taal se taal mila’ in front of the mirror and today I got the opportunity to perform on the song on this platform,” said the 26-year-old actress. Other performers of the night included Parineeti Chopra and Anushka, who made everyone swing to her performance as she mostly danced to songs from her latest film “Dil Dhadakne Do”. Sonakshi Sinha did a medley of Amitabh Bachchan and other superstars’ songs.

A special tribute to Shah Rukh and Kajol-starrer “Dilwale Dulhania Le Jayenge”, which completed 1,000 weeks of screening last year, was paid by the show’s hosts, who also cracked jokes on their controversial AIB Roast video for which they got into trouble earlier this year.

Held at Putra Indoor Stadium, the award ceremony was attended by thousands of screaming fans, some of whom had flown from different countries just to see their favourite stars at the gala, which celebrates Indian cinema in various foreign nations every year. It was a perfect evening to bring the curtains down on the grand three-day celebration of Bollywood in the Malaysian capital, where fans gathered to be part of the glitz and glamour.