Irrfan Khan on The Newshour Debate: Huge chunk of Muslims are fighting against terrorism (Watch video)

During the holy month of Ramadan, Irrfan had openly said that instead of observing fast during the month, people should rather introspect. 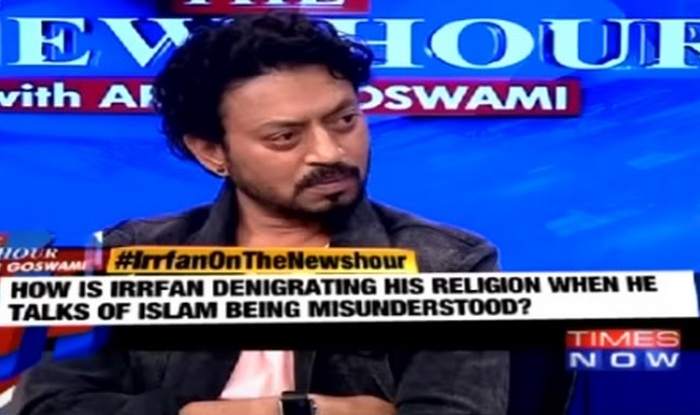 Arnab Goswami, Times Now Editor-in-Chief, brought in actor Irrfan Khan on his popular evening show The Newshour on July 25. As usual, the topic was controversial and this time it was about Irrfan’s recent comments on Islam, Ramadan and Roza and the unfortunate fact that terrorism was a part of some Muslims’ lives. Also Read - 'I Celebrate Your Birthday Because You Were Born'! Irrfan Khan's Wife Sutapa Sikdar, Son Babil Remember Him On His Birth Anniversary

Arnab Goswami and the panelists debated about Irrfan’s challenging some things observed by his religion during Ramadan and Muharram. Saying that “Mercy and compassion are the basis of Islam”, Irrfan spoke about the misconceptions people have about Islam and terrorism. “We don’t see the whole picture. There is a huge chunk of Muslim population that is fighting against terrorism. We only see Muslims in India. When you go abroad, you see there are people who are fighting terror… and trying to put Islam, the way they have understood, in the right perspective,” said Irrfan while talking to Arnab.

“The way I have understood Islam is through some incidents. And there are various delicate experiences that teach you these philosophies, which have multiple layers. It’s not a single dimension and that’s why it continues for years and years,” he said, revealing some incidents that he heard in his childhood.

During the holy month of Ramadan, Irrfan had openly said that instead of observing fast during the month, people should rather introspect. He has also spoken against sacrifice during Muharram and how one is supposed to mourn in that period and not celebrate it like a festival. (ALSO READ: Barkha Dutt slams Arnab Goswami for trying to ‘gag’ journalists)

The Madaari actor revealed the reason behind such suggestions to Muslims. For what he actually said, the incident he narrated, and for the panelists’ view, you must watch the Newshour debate video here!

Irrfan had said during Ramadan, “Rather than fasting during Ramzan, people should self-introspect. Animals are being slaughtered on the name of qurbaani during Muharram. We, Muslims, have made a mockery of Muharram. It is meant for mourning and what we do? Take out tajiya (processions).”