Actor Irrfan Khan left for his heavenly abode on Wednesday, April 29, 2020. His fans and family are heartbroken as he left the world so soon. However, his work will be cherished forever as artists never die. After sharing a heartfelt note where he thanked all the supporters and friends for offering condolences, Irrfan’s elder son Babil Khan now shares an old video of the English Medium actor.Also Read - KRK Deletes His 'Back For My Vengeance' Tweet, Says 'I've Forgotten Whatever Bad Happened With Me'

Just to spread some happiness amidst all the sadness, Babil shared a sweet video of Irrfan where he can be seen eating pani puris. The video was shot after his shooting for a film ended. The caption says, “When you’re on diet for so long and then the shoot ends and you can have pani puri.” Also Read - KRK Arrested: Twitter Starts Meme-Fest, Bollywood Fans Say 'Karan Johar is Happiest Today' | Check Funny Tweets

Through this video, we can guess that Irrfan liked eating pani puris. Fans thanked Babil for sharing the video and showing them insights of their favourite actor. It will definitely bring a smile on your face. Also Read - Irrfan Khan's Wife Sutapa Sikdar Says She Keeps Wondering 'Did I Do Something Wrong?'

When you’re on diet for so long and then the shoot ends and you can have pani puri.

Babil Khan also shared a caricature picture of Irrfan Khan’s heavenly abode. The funny picture shows Irrfan’s cartoonish character who is seen having a conversation with God and asking him to give him a great script. The caption says, ‘You better show me a great script. 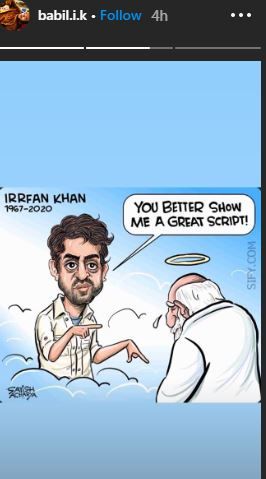 Irrfan was admitted to Mumbai’s Kokilaben Dhirubhai Ambani hospital with a colon infection earlier this week. However, unfortunately, he succumbed to his ailment. He is survived by his wife Sutapa Sikdar and two sons Babil and Ayan.