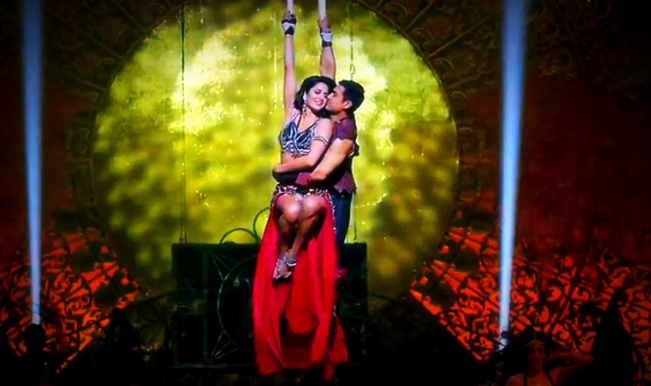 Also Read - Ali Abbas Zafar And Katrina Kaif's Superhero Film Sold to Netflix Even Before Going on The Floors?

Aamir Khan and Katrina Kaif’s movie Dhoom 3: Back in Action is creating a buzz for all the right reasons – whether it’s Aamir’s new look or Katrina’s hotness, or the location. The songs have also gone viral. However, more than the title song Dhoom machale dhoom, the acrobatics number Malang is generating more curiosity. Also Read - Ali Abbas Zafar Finishes Script of Katrina Kaif's Superhero Film at His New Bungalow in Dehradun

Not only is it being touted as the most expensive song ever – with spectacular sets and ‘fiery’ props – but also one where the actors have worked their bottoms off. Aamir and Katrina trained extensively in acrobatics and trapeze, as can be seen in the making video. What we love is that in the final take, they made it look so graceful and simple, when it’s actually a lot of hard work to do those stunts. Also Read - Katrina Kaif Has a Special Place For Floral Prints in Her Heart And we Have Proof of That

Aamir also spent three hours just to have his special body painting make-up on. Such is his dedication. And Katrina too looked like a pro doing that dance in her pretty clothing. Is it Aamir-Katrina’s best song ever, even in their individual careers?

Take a look at Malang song making video and tell us if you like the actors as much as we do!

Also find the lyrics of Malang full song below!

Dhoom 3 stars Aamir Khan, Katrina Kaif, Abhishek Bachchan and Uday Chopra. It is produced by Aditya Chopra, and written and directed by Vijay Krishna Acharya. The film releases on December 20, 2013.