Is Preity Zinta lying? Police finds nothing in CCTV footage 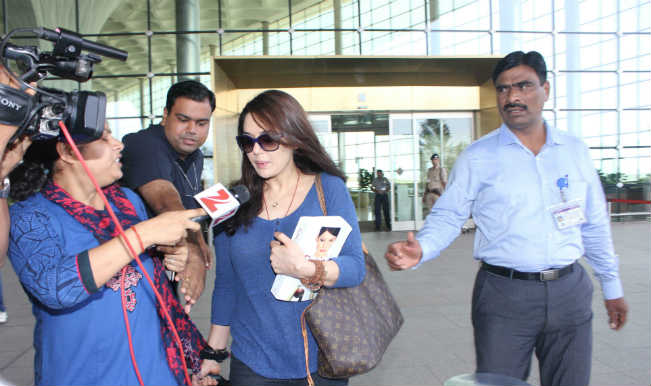 The Priety Zinta–Ness Wadia mess is not going to die down sometime in real future. Mumbai Police recorded the statement of Preity Zinta and also filed a report which may actually go against the Bollywood actor. The police claimed that they have gone through footage of all the five CCTV cameras at Garware Pavilion where according to Zinta the alleged incident took place. But none of the cameras recorded any argument between the actor and Wadia. Also Read - MCA Proposes Naming Wankhede Seat After MS Dhoni Where His Famous 2011 World Cup Six Landed

According to the investigation of the Mumbai Police, there are 172 rotating CCTV cameras inside the Wankhede stadium, with five of them are covering the footage of Garware pavilion. Also Read - Even if There is One Coronavirus Positive Case, The IPL Could be Doomed: KXIP Co-Owner Ness Wadia

Currently the footage is with Sony Company, the official broadcasters for the Indian Premiere League 2014.

Zinta filed a police complaint on the 12th of June, against her boyfriend Ness Wadia of abusing and molesting her in public at the Wankhede stadium during a match. Wadia, however rubbished all the allegations saying them ‘false and baseless’.

Zinta, on Tuesday mentioned the names of fourteen witnesses out of which seven have been cross examined by the Police. The witnesses include Jean (Friend of Zinta), Parents of an Australian cricketer, Sundar Raman (COO of Indian Premiere League) and Sanjay Patel (Secretary, BCCI) and six staff members of Kings XI Punjab team.

Marine Drive Police registered an FIR against Wadia under IPC Sections 354 (assault or criminal force to woman with intent to outrage her modesty), 504 (intentional insult with intent to provoke breach of peace), 506 (criminal intimidation) and 509 (word, gesture or act intended to insult the modesty of a woman).

With CCTV footage of Wankhede Stadium’s Garvare Pavilion shedding no light on alleged molestation of Bollywood actress Preity Zinta by her former boyfriend and industrialist Ness Wadia, investigators may have to depend on witnesses to take forward the case, police said.

“There were 172 rotating CCTV cameras inside the Wankhede ground and five CCTVs installed at Garware pavilion. The examination of these five CCTV footages did not provide any evidence that would help us in the probe,” said a police officer privy to the probe. “The five CCTV cameras which we thought would give some crucial leads have neither captured any argument nor any scuffle between the two,” the officer said.

Zinta had filed a police complaint on June 12 alleging that Wadia outraged her modesty at the stadium on May 30 during an IPL match between Kings XI Punjab and Chennai Super Kings. Wadia, who co-owns Kings XI Punjab with Zinta and others, has rubbished the allegations as “false and baseless”.

Meanwhile, Zinta, whose supplementary statement was recorded yesterday, has given a list of 14 names to the police, including that of a foreigner named Jean, as among those who were witness to the incident. The foreign national would also be asked to record his statement, if required, police said.

The probe team is still awaiting video camera footages from Sony, which had telecast rights of the match, to throw some light on the alleged incident. “Sony is yet to provide the unedited camera footage,” an officer from the Marine Drive police station said.
He said in the absence of technical evidence, the statements of witnesses would be crucial to the case.

Apart from Marine Drive police, which recorded the actress’ statement regarding the alleged spat with the Wadia group scion, the anti-extortion cell of the crime branch recorded her account in connection with the threat calls and SMS message the Wadia group has claimed to have received from fugitive gangster Ravi Pujari asking them to keep off Zinta.

Two personal secretaries to industrialist Nusli Wadia, Ness‘ father, had reportedly received threatening calls on June 16 from a man claiming to be Pujari from a phone traced to Iran and the caller had warned them that their “business will be in trouble” if the actress is harassed.

Police have so far recorded the statements of seven witnesses, including IPL COO Sundar Raman and BCCI Secretary Sanjay Patel, in connection with the molestation case filed by Zinta, who had claimed she had informed them about the alleged incident.