It’s Akshay Vs Akshay in Taekwondo face-off on a reality show!

Bollywood actor Akshay Kumar displayed his tricks of Taekwondo on a reality TV show when he went to promote his upcoming movie "Entertainment" on the platform. 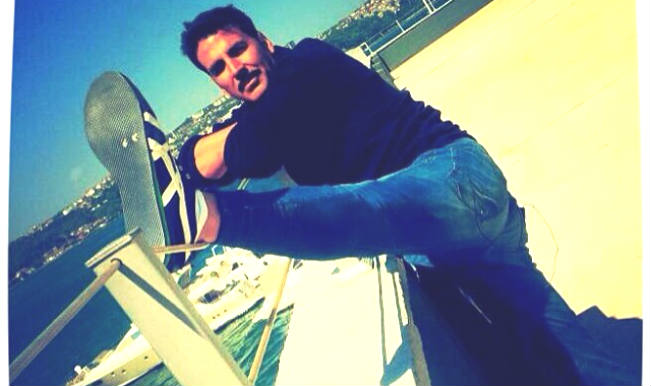 Mumbai, Aug 1: Bollywood actor Akshay Kumar displayed his tricks of Taekwondo on a reality TV show when he went to promote his upcoming movie “Entertainment” on the platform. There, he happened to have a face-off with a contestant, also named Akshay. Also Read - Laxmmi Bomb Gets a Release Date on OTT Platform, Akshay Kumar Shares Details of Where And When to Watch

On the show, Nalawade shared that he idolises Akshay and that the trained martial arts star is also his inspiration to get a black-belt in Taekwondo. Akshay was touched. Also Read - What to Watch on Akshay Kumar’s Birthday? Check His Movies on Netflix, Disney +Hotstar, Amazon Prime Video, Zee5

Nalawade then requested the screen hero to come on stage and teach him a few Taekwondo tricks. The action titan immediately obliged and did a face-off in a non-contact fight with the contestant.

A few kicks and punches here and there and Akshay Kumar knocked Nalawade down. And no, Nalawade didn’t mind!