Neha Kakkar confirms her relationship with her boyfriend Rohanpreet Singh on Instagram. She wrote: "You are mine"

Popular singers Neha Kakkar and Rohanpreet Singh are officially a couple now. The duo are so much in love with each other and their fans can’t stop themselves from gushing over their sizzling chemistry. Both of them confirmed their relationship on Instagram just after netizens were speculating their marriage. Neha took to her Instagram and wrote: “You’re Mine @rohanpreetsingh #NehuPreet”. To which, her boyfriend Rohanpreet replied: “@nehakakkar Babuuuuuuuu 😍😍😍😍😍 i love youuuuu soooo much mera putt meri jaaaaan❤️❤️❤️❤️🙈🙈🙈🙈🙈YES I AM ONLY YOURS 😇😇😇😇😇❤️❤️❤️❤️❤️❤️❤️ MERI ZINDAGI❤️❤️😇😇👰🏻👰🏻😍😍🥰🥰❤️❤️😘😘🤩🤩❤️❤️”. Also Read - Neha Kakkar's Wedding First Video Out: Singer Gets Married to Rohanpreet Singh in Anand Karaj Ceremony at a Delhi Gurudwara

Not only this, Neha’s brother and singer Tony Kakkar also messaged: “And both are mine ♥️😍”. Also Read - Neha Kakkar Stuns in an Anita Dongre Lehenga Worth Rs 75,000 at Her Mehendi Function

Rohanpreet Singh was the first runner-up in the second season of the music reality show, India Rising Star. Neha and Rohanpreet recently did a music video together titled ‘Aaja Chal Vyaah Karwaiye Lockdown vich Katt Hone Kharche’ and she even posted Punjabi lyrics of her single on her Insta-story which meant ‘let’s get married in the lockdown, we will incur fewer expenses due to the pandemic’. 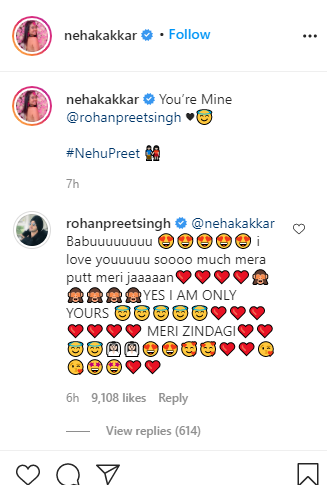 A source close to Kakkar told Times of India about their wedding, “The wedding is likely to take place in Delhi by the end of this month. It will be low-key due to the pandemic. Yes, we have also heard such talks, but the two did a single together and that’s why they have been linked. Rohanpreet has no plans to get married.”

Bollywood celebrities such as Mukesh Chhabra, Bharti Singh, Arjun Bijlani and others congratulated the new couple in the town.