Katrina Kaif and Janhvi Kapoor are the new BFFs in Tinseltown who workout together. The two hotties share the same gym for sweating it out. And it seems like, that working out together for months, have made them really good friends. Proving so, Katrina shared a picture on her Instagram story, where we can see Janhvi sitting on the reception desk, pretending to talk on the phone. Kat hilariously captioned the post as, “Gym has a very pretty new receptionist in @janhvikapoor.” Going by Kat’s post, it seems like the duo shares a warm camaraderie. In the picture that has taken the internet by storm, we can see Janhvi wearing an ethnic attire with her hair tied in a plait. Needless to say, she looked absolutely stunning in the picture. Also Read - Siddhant Chaturvedi On Working With Deepika Padukone: I Am Living Out Of A Dream In Every Possible Way

Both Katrina and Janhvi are among the fittest actors in Bollywood and spend hours in gym to stay fit.  Now, it seems like that the Tiger Zinda Hai actress is in awe of Janhvi as she is all praises for the newbie in the picture. The picture is certainly giving us all major friendship goals. Also Read - Janhvi Kapoor Dazzles In A Classic Yellow Saree By Manish Malhotra, See PICS

Take a look at the adorable picture: 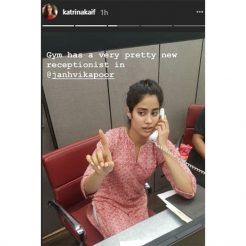 Some time back, the ‘Dhoom 3’ actress in an interview to Hindustan Times, talked about how she feels responsible to encourage newbies like Janhvi and Ishaan Khatter in the film industry. She was quoted, as saying, “Today, I can’t seek to be where I used to be at one point because that’s not my age anymore. Today, if you are making Dhadak with Janhvi Kapoor and Ishaan Khatter, I can’t be cast in that film and it (casting me in the film) won’t be correct either. When I see the two of them together, they look so lovely and sweet. And I feel really happy.”

On the work front, Boney Kapoor’s daughter Janhvi is gearing up for the release of her Bollywood debut Dhadak opposite Shahid Kapoor’s brother Ishaan Khatter. Katrina, on the other hand, will next be seen in Thugs of Hindostan that also stars Aamir Khan and Amitabh Bachchan.