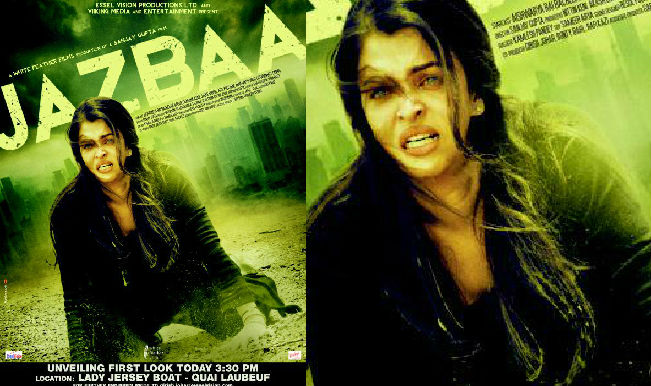 The most awaited first look of Aishwarya Rai’s comeback venture is finally out. Jazbaa has been a topic of debate ever since it was announced. But the filmmakers stayed tight lipped about the film and wanted everything to be kept under covers. However, recently it was reported that Aishwarya will unveil the first look of her upcoming film at the 68th Cannes International Film Festival. Aishwarya has been regularly visiting this festival for the last 14 years as a brand ambassador of Loreal. (ALSO READ: Cannes 2015: Aishwarya Rai Bachchan or Katrina Kaif — who pulled it off better at the red carpet?) Also Read - Aishwarya Rai Bachchan's Sarbjit to release on May 20; will it premiere at Cannes Film Festival?

In the first look of Jazbaa, the former beauty queen looks distressed as she makes her way through the dust. With a backdrop of tall skyscrapers, the actress looks all determined to seek revenge. As the movie’s title goes, Aishwarya has that never dying Jazbaa in her look and gives you a feeling that movie is worth the wait. The first look was launched by directer Sanjay Gupta on his twitter profile. Also Read - Shabana Azmi: Male stars should play second fiddle to actresses

Aishwarya will return back to the silver screen after five year long maternity break. She was last seen in Guzaarish opposite Hrithik Roshan back in 2010. Aishwarya is set to play the role of a lawyer in Jazbaa. The movie also stars Irrfan Khan, Shabana Azmi and Anupam Kher. If reports are to be believed, this film is a remake of a South Korean film Seven Days released in the year 2007. Jazbaa is scheduled to hit the big screens by October 9, 2015. (ALSO READ: Aishwarya Rai Bachchan to launch first look of Jazbaa at Cannes)