"Jigarthanda" is completely subversive in nature and It's biographical too, probably in taking us the through the journey of a filmmaker who has successfully found a way to make his films against the system without being penalized for it. 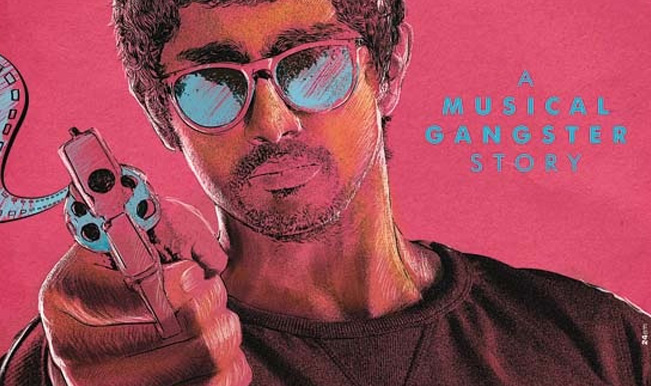 Rating: ***1/2 Also Read - Siddharth Suryanarayan Sounds Promising as Simba in Tamil Version of Lion King And THIS Video is Proof!

Two-film old Karthik Subbaraj has become adept at conning his audiences with his completely unpredictable films. If his debut film “Pizza” was a con story covered with layers of a horror thriller, “Jigarthanda” is a satirical tale of a filmmaker (Karthik Subbaraj himself) wanting to make a gangster film.

You know its Subbaraj’s story because the film’s lead character is named after him (Karthik), played by Siddharth, who aspires to make a realistic gangster film and lands in Madurai to closely follow the life of a real gangster called ‘Assault’ Sethu (Simhaa).

Subbaraj loves to experiment with his work, but he’s confined to work within the system that tells young filmmakers what kind of films are accepted and how they should be made. “Jigarthanda” was supposed to be Karthik’s debut film but for reasons unknown, he was forced to make “Pizza”, which eventually went on to be a sleeper hit. The reasons why he was not allowed to make “Jigarthanda” earlier are explained in the film in detail. And if you happen to miss it, that’s probably because Subbaraj cons you and makes you see his work only as a gangster film.

In one of the earlier scenes of “Jigarthanda”, Karthik’s (Siddharth) short film on the sets of a reality show is rejected by an award-winning director, while a successful producer hails it. The latter even promises to produce his film and when Karthik lands in his office the next day with his story, he’s advised to make a gangster film.

Before making “Pizza”, Subbaraj too was a runner up on a television reality show for short films and subsequently had approached several producers with the script of “Jigarthanda”. But producers were not keen on taking a chance with a newcomer.

It’s Subbaraj versus the system in “Jigarthanda”. In one of the most important scenes, an elderly man, who once wanted to be a filmmaker but couldn’t, tells Karthik (Siddharth) that it’s perfectly alright to compromise as a newcomer in the industry.

He goes on to explain how he ended his filmmaking dream after refusing to succumb to the request of his producer. This is not just a scene in the movie, but it sure must have come out of Subbaraj’s personal life. Maybe one of his well-wishers must have advised him to give up on making “Jigarthanda” at the beginning of his career and instead make something that will find him a place in the filmdom.

In another scene, Karthik (Siddharth) is forced and threatened to make his gangster film with a hero who can’t act for nuts. Karthik is upset with the idea and vents to his friend about the situation – “Who is he? What does he know about acting? Acting is art! What the f*** does he know about art”.

But the film is eventually made with him and it turns out to be a blockbuster. At this juncture, Subbaraj reminds us of the kind of films our industry produces with actors who are where they are because they’re powerful and are probably sons of renowned producers and actors.

“Jigarthanda” is completely subversive in nature and It’s biographical too, probably in taking us the through the journey of a filmmaker who has successfully found a way to make his films against the system without being penalized for it. You’d be a fool if you didn’t realize Subbaraj’s gangster (Sethu) in the film is actually the system he’s locked horns with. Sethu and the system are ruthless, unforgiving and hard to please.

If the purpose of “Jigarthanda” was to deliver a tight slap on the face of the system, it has succeeded in it. Thanks to the impeccable performances of the lead cast, especially Simhaa, director Subbaraj has conveniently conned us into seeing his film as a gangster flick-turned-comedy caper.

Composer Santosh Narayan and cinematographer Gavemic Ary deserve special mention for uplifting the film with their respective work. They divert us to make Subbaraj’s process of conning easier.