Making a comeback after eight long years, actress Jyotika's latest Tamil release "36 Vayadhinile", which is about a woman and her pursuit of dreams, has raked in over Rs.8 crore in the six days since its release in Tamil Nadu. 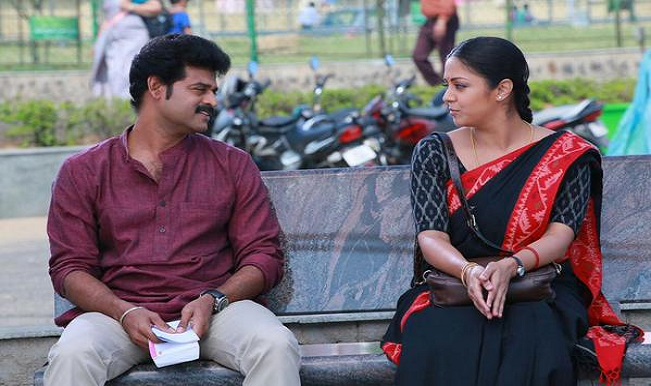 Chennai, May 22: Making a comeback after eight long years, actress Jyotika’s latest Tamil release “36 Vayadhinile”, which is about a woman and her pursuit of dreams, has raked in over Rs.8 crore in the six days since its release in Tamil Nadu. “The film opened to highly positive word-of-mouth. Although targeted at women, even men and family audiences have lapped up the film. It has minted Rs.8 crore and above in six days. At this rate, the film may collect over Rs.20 crore in another week in the cinemas,” trade analyst Trinath told IANS. (Also Raed: Jyotika thanks fans for 36 Vayadhinile success) Also Read - Tamil Comedian Vadivel Balaji Dies 15 Days After Suffering Heart Attack at 45

According to a statement released by the film’s makers, the movie has been shifted to bigger screens across select cinema screens in multiplexes. Buoyed with the positive response to her film, Jyotika recently said: “I’m overwhelmed with the love and respect towards ’36 Vayadhinile’. I did the film with a fire inside me believing that women should be respected for being homemakers as they juggle between many roles in day-to-day life, thereby losing the drive to chase their own dreams.”She also did the film because “I felt it will give heroines a better standing in this male-dominated industry and make women understand that our identity lie in our self-respect, confidence and achievements, and not just in marital status”. Directed by Rosshan Andrews, the film is produced by Jyotika’s actor-husband Suriya under his home banner 2D Entertainment. Suriya has already bought the remake rights of the movie in all India languages. And according to an insider, talks are on with a leading Telugu star to start work on the Telugu version.Jyotika thanks fans for 36 Vayadhinile success Also Read - 'I am Indian, I Don't Speak Hindi': T-Shirts With Slogans Against Hindi Imposition Go Viral in Tamil Nadu