Kajal Aggarwal's Haldi and Mehendi ceremonies will be hosted by the family at their home a day before the big day, i.e., October 29.

Actor Kajal Aggarwal is all set to tie the knot with fiancé Gautam Kitchlu on October 30 i.e. Friday. Early this month, the south sensation confirmed her wedding and now it is Kajal’s sister Nisha Aggarwal who has spilled the beans on the pre-wedding functions, her Haldi and Mehendi ceremonies, that it will be hosted by the family at their home a day before the big day, i.e., October 29. Also Read - Kajal Aggarwal Sizzles in Rs 13k Red Maxi Dress, Updates Fans With Her Jaw-Dropping Pictures

Speaking exclusively to Hyderabad Times, Nisha revealed that Kajal and Gautam’s wedding will be a low-key affair due to the COVID-19 pandemic and guidelines. The family is really excited as they are trying the best to create wedding vibes for Kajal. “Due to the Covid-19 pandemic, we’re keeping the celebrations low-key. Despite the restrictions in place, we’re trying our best to create the Shaadi ka mahaaul. We will be hosting traditional haldi and Mehendi ceremonies at home. Both ceremonies will take place on the same day — October 29, one day before the wedding. We’re all extremely thrilled for Kajal and we’re so excited for her as she begins her new journey”, said Kajal’s sister. Also Read - Kajal Aggarwal, in Black Monokini, Explores Sea Life With Gautam Kitchlu as The Honeymoon Continues

On Wednesday morning, Nisha Aggarwal took to Instagram story to share a pic with bride-to-be. She wrote: “That wedding glow is just a workout away! Mehendi Hai Rachne Wali #KAJGAUTKITCHED”. 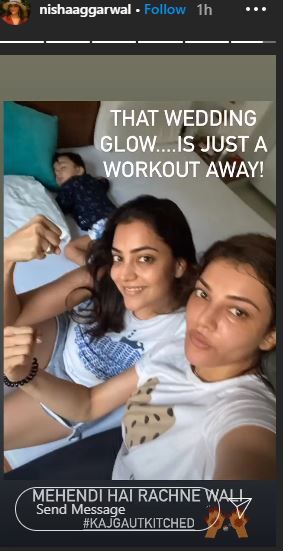 Kajal’s sister also revealed about her would-be brother-in-law Gautam. She said, “Gautam is a great guy and I’m delighted to welcome him into the family. As for their love story, I’ll let Kajal be the one to share it with the world.”

On the work front, Kajal is making her digital debut with a Tamil web series Live Telecast’ Helmed by Venkat Prabhu, the show revolved around television producers who get more than they bargained for while trying to capture paranormal activities on camera. It will release on Disney+Hotstar.