Kangana Ranaut Desires to Change this slave name India back to Bharat, Gets Trolled.

Mumbai: Kangana Ranaut has become one of the actors who purposely invite controversies. After she was banned from Twitter, Kangana chose Instagram as a medium to share her thoughts – which usually created a stir. Recently, Kangana Ranaut expressed her want to rename India back to ‘Bharat’. Clarifying her views over it, in a long post, the Tejas actor claimed that the name India has been given to Bharat by Britishers and also tagged it as a slave name.Also Read - IND vs AUS 3rd T20I: ‘India Beat Pakistan’ As Rohit Sharma-Led Side Outdo Australia To Take Series 2-1 | DEETS Inside

In one of Kangana Ranaut’s posts, she shared a screenshot of her Koo account. It read, “India can only rise if it’s rooted in its ancient spirituality and wisdom, that is the soul of our great civilisation. The world will look up to us and we will emerge as a world leader if we go higher in urban growth but not be cheap copy of western world and remain deeply rooted in Vedas, Geeta and Yoga, can we please change this slave name India back to Bharat.” Also Read - Pak PM Shehbaz Sharif Told Maryam Nawaz's Son-in-law Wants To Import Power Plant From India | Audio Goes Viral 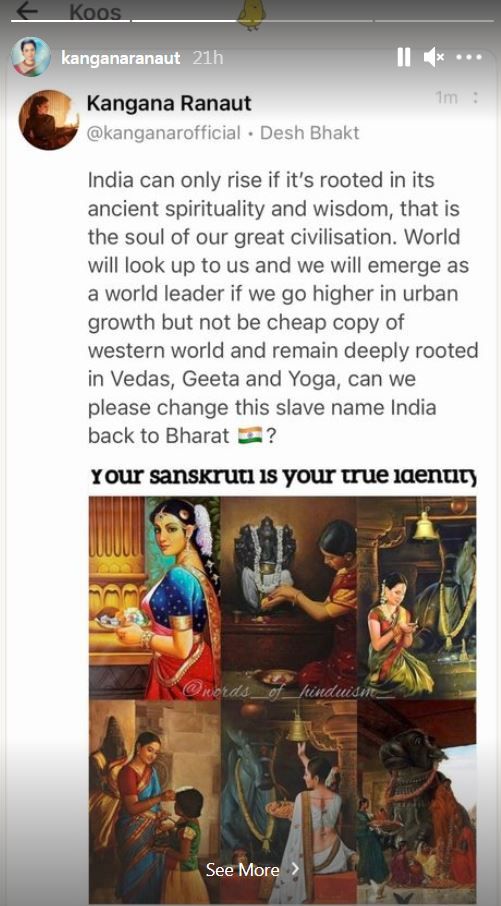 In a follow-up post, Kangana explained why India should be renamed as ‘Bharat’: Also Read - Hema Malini Refers To ‘Rakhi Sawant’ Amid Speculation That Kangana Ranaut Might Contest From Mathura

“British gave us slave name India… which literally means east of Indus River. Really would you call a child small nose or second-born or worse C section. What kind of a name is this? So rudimentary. Let me tell you the meaning of Bharat. It’s made of three Sanskrit words BH (bhav), Ra (rag), ta (tal). Yes, that’s who we were before we were enslaved, the most culturally and aesthetically evolved civilization. Every name has a vibration and the British knew this they not only gave new names to places but even to people and important monuments. We must regain our lost glory, let’s start with the name Bharat,” wrote Kangana Ranaut. 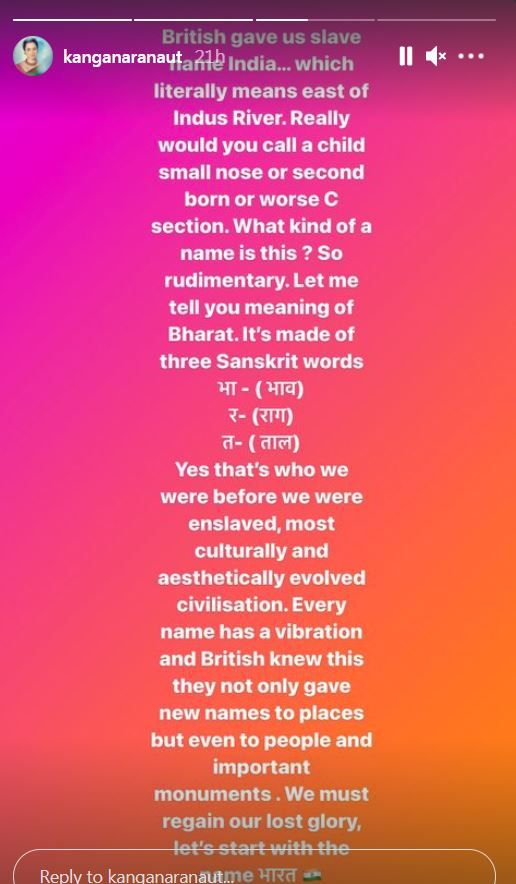 Netizens were quick to slam Kangana as one of the users wrote: Kangana Ranaut says India is a ‘slave name’ given by British, and therefore must be replaced with Bharat. But who’s gonna tell her that before British there was neither India, nor Bharat?

Kangana Ranaut says India is a ‘slave name’ given by British, and therefore must be replaced with Bharat. But who’s gonna tell her that before British there was neither India, nor Bharat?

On the work front, Kangana Ranaut will next be seen in the Thalaivi movie which is the biopic of former Chief Minister Of Tamil Nadu Jayalalitha. The Tamil version of this movie has bagged U censor certificate.