Mumbai: Bollywood’s most controversial actor Kangana Ranaut, who recently marked 15 years in the industry as her film Gangster hit the screens on April 28, 2006, shared a tweet on Wednesday, comparing herself with megastar Shah Rukh Khan. She said that SRK and her journey in showbiz are almost the same. “15 years ago Gangster released today, Shahrukh Khan ji and mine are the biggest success stories ever but SRK was from Delhi, convent educated and his parents were involved in films, I did not know a single word of English, no education, came from a remote village of HP and Every step was a battle starting with my own father and grandfather, who made my life miserable, and yet 15 years later after so much success still every day is a fight for survival but totally worth it, thank you everyone,” wrote Kangana.Also Read - Kartik Aaryan Praises Dhaakad, Breaks Silence on Kangana Ranaut Supporting His Self-Made Journey | Exclusive

Soon after her tweet Kangana was trolled on saying Shah Rukh Khan’s parents were involved in films. One of the users asked with a lot of question marks: “Shahrukh Parents involved in films?”. Another user trolled Kangana for spreading fake news. He wrote: “Sahi bola bhaijaan ye unty ab firse fake news spread karna star kardiya shahrukh khan lost his parents just 15years old then his sister got depression then started his career by serial bollywood debut by other rejected movies he never give up life”. Also Read - Kangana Ranaut Breaks Silence on Gyanvapi Masjid Controversy Ahead of Dhaakad Release: 'There's Lord Shiva...'

Shah Rukh Khan’s fan also jumped in and said, “Kuch bhi.. Shahrukh touched the sky. Your success story goes from ground to ceiling fan & then full speed in the dustbin. Sanghi, you didn’t study because you wanted fame at any cost. Like now. Jobless and hopeless, but the urge for fame is making you write crap on twitter.” Also Read - Kangana Ranaut Says She Doesn't Follow Gandhigiri: 'Jo Ek Gaal Par Thappad Kha Ke...' | Exclusive 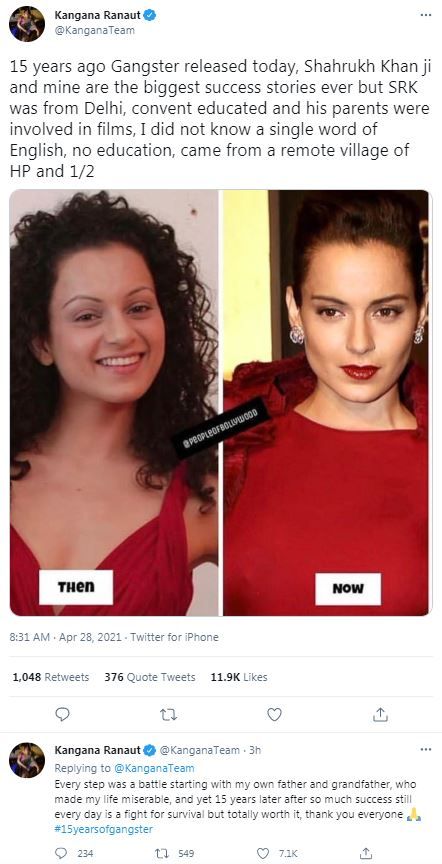 Talking about Ranaut’s achievements, she has won four National Awards, for her performance in Fashion, Queen, Tanu Weds Manu and Manikarnika/Panga.