Kangana Ranaut pays respect to late politician Jayalalithaa on the sets of Thalaivi. The picture of the actor from the sets of her film goes viral.

Actor Kangana Ranaut is playing the role of celebrated politician J Jayalalithaa in her upcoming film titled Thalaivi. The film is the first official biopic made on the politician and Kangana is working extremely hard to polish her skills. December 5 marks Jayalalithaa’s death anniversary and Kangana paid respects to the politician on the sets of her film. A picture of the actor offering flowers in front of Amma’s portrait was shared by her official team on social media. Also Read - Rangoli Chandel Slams User For Trolling Kangana Ranaut For Eating Hormone Pills to Look Like Jayalalithaa

Dressed in printed separates, Kangana is seen donning a bouncy hairdo from the 70s. The photo frame of the politician is fully visible in the picture. It is a click from the sets of Thalaivi. Check this out: Also Read - Kangana Ranaut Practising Bharatnatyam For Thalaivi is The Kind of Mid-Week Motivation You Need 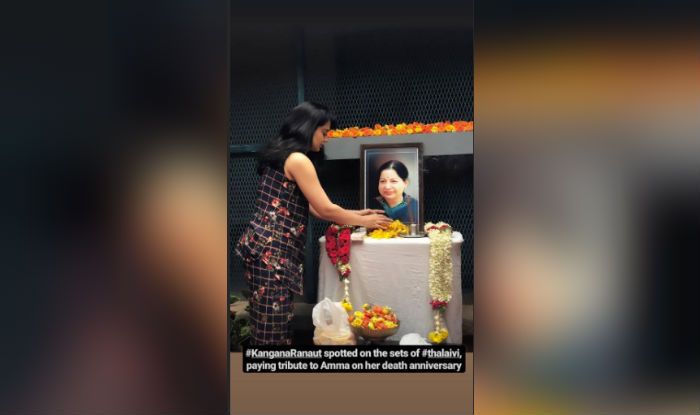 Directed by AL Vijay, Thalaivi is slated to hit the screens on February 20, next year. The film is being made on a grand budget and trails Amma’s life from the age of 16 to her filmy career, her political rise, illness and death. The first look of Kangana as the former CM of Tamil Nadu was recently released to mixed reviews. A section of the audience found her look too-gimmicky-for-biopic and criticised the team for making Kangana look extremely funny. However, some others appreciated the actor for her hardwork and patience with the prosthetics. Also Read - Kangana Ranaut Announces New Film Based on Ram Mandir Case, Titled Aparajitha Ayodhya

Apart from Thalaivi, Kangana is also gearing up for the release of Panga which is slated for release on January 24. The film is directed by Ashwiny Iyer Tiwari and features the actor in the role of a Kabaddi player. Kangana has also announced Dhaakad, an action entertainer, to be released during Diwali 2020. The actor has also begun work under her production company. Her first film under her home banner named Manikarnika Films is based on the decades-long Ayodhya-Babri Masjid case. Kangana recently announced that she’s making a film titled Aparajitha Ayodhya which is based on the Ram Mandir dispute.