This is How Kangana Ranaut Reacted To AIIMS Doctor Receiving COVID-19 Vaccine Shot.

Actor Kangana Ranaut, who has never shied away from sharing her views on social media, has now responded to a tweet showcasing the AIIMS director receiving the COVID-19 vaccine shot. The coronavirus vaccination was kicked-off by the Prime Minister, Narendra Modi, virtually today.Also Read - UK Classifies New Form Of Omicron As 'Variant Under Investigation'

The first one to receive a COVID-19 vaccine shot was AIIMS director, Randeep Guleria. She reacted to the tweet by ANI and wrote, “Wonderful!! Can’t wait.’ Also Read - Thailand Tourism Latest Update: Thailand Opens up For Quarantine-Free Entry For Vaccinated Visitors 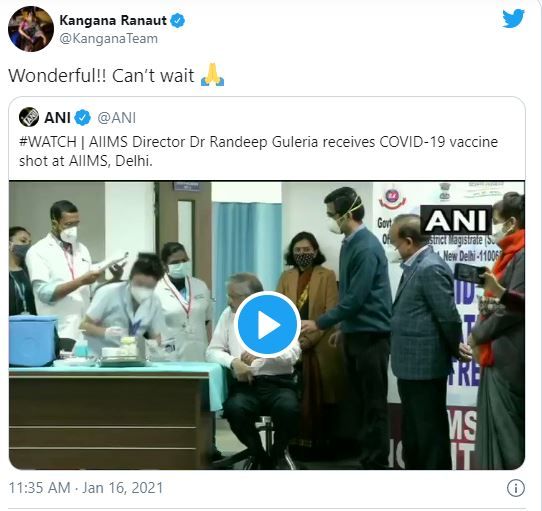 Meanwhile, on the work front, she is currently busy shooting for her film Dhaakad in Bhopal. She has also announced the sequel of Manikarnika which is based on the chronicles of ‘The Cleopatra of Kashmir’s Didda’ who rules the valley during 10th and 11th centuries. Kangana has Tejas in which she essays the role of an Indian Air Force pilot, Dhaakad, an action thriller film. She also announced Aparajita Ayodhya, which is based on the Babri Masjid demolition incident and a yet-to-be-titled film based on the exodus of the Kashmiri Pandits and Thalaivi.

Recently, the Bombay High Court on Monday extended the interim relief of no coercive action against actor Kangana Ranaut and her sister Rangoli Chandel till January 25 in connection with the FIR against the sisters in the Sedition case. The court also directed that the Mumbai police will not summon them for interrogation until then. In the FIR, Kangana and Rangoli have been accused of spreading communal hatred, using offensive language, and making derogatory comments against Bollywood and Maharashtra’s Chief Minister Uddhav Thackeray in their tweets and interviews.

Previously, the Bombay High Court ordered an FIR to be registered against Kangana and Rangoli after Bandra Metropolitan Magistrate JY Ghule took cognizance of the Bollywood casting director and fitness trainer, Munawwarali Sahil Sayyed, to register a complaint against the sibling.