Kangana Ranaut Reacts to Raj Kundra Pornographic Case: This is Why I Call Movie Industry a Gutter

Raj Kundra Pornographic Case: Kangana Ranaut took to social media on Tuesday to react to the news of businessman Raj Kundra‘s arrest on charges of making pornographic content and publishing them through mobile applications. The actor-producer also warned saying she would expose the underbelly of Bullywood in her upcoming production ‘Tiku weds Sheru’. While reacting to Kundra’s arrest, Kangana said: “This is why I call movie industry a gutter… all that glitter is not gold, I am going to expose underbelly of Bullywood in my upcoming production called Tiku weds Sheru”.

Kangana Ranaut further added, “We need a strong value system and conscience in the creative industry and of course a whip.”

The actor announced her next film ‘Tiku weds Sheru’. A few days ago, she welcomed actor Nawazuddin Siddiqui to the team. “The best actor of our generation joins team Tiku weds Sheru…We are privileged to have found our lion. Filming begins soon,” the post read. 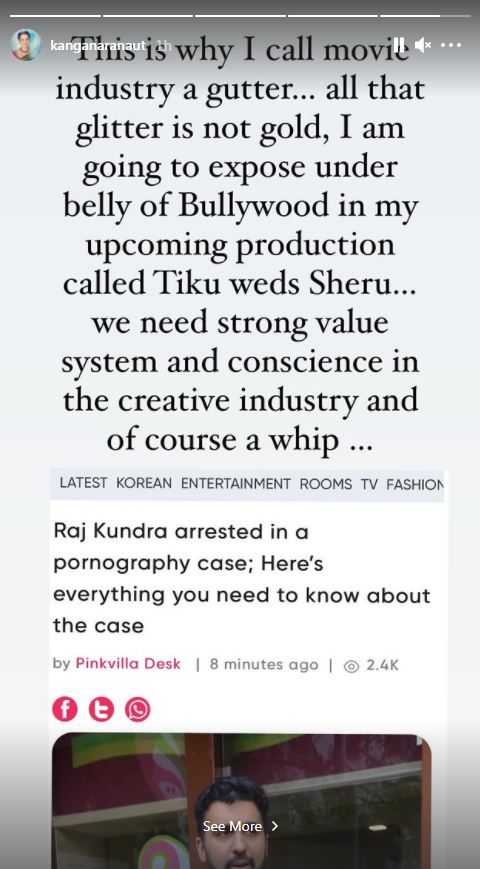 Meanwhile, in Raj Kundra’s case, the Mumbai Police on Monday night arrested Shilpa Shetty’s husband and businessman Raj Kundra, on charges of making pornographic content. He is the ‘key conspirator’ in the case and spent the night in custody. Kundra, who was produced before a Mumbai magistrate on Tuesday, has been remanded to police custody till July 23.

The Mumbai Police Commissioner, Hemant Nagrale confirmed the controversial arrest in a statement that read, “There was a case registered with Crime Branch Mumbai in February 2021 about the creation of pornographic films and publishing them through some Apps. We’ve arrested Mr Raj Kundra in this case on 19/7/21 as he appears to be the key conspirator of this.” After his arrest, the 45-year-old businessman was taken for medical examination to the JJ hospital by the Property Cell of Mumbai Police’s Crime Branch.