Kangana Ranaut Receives Notice From BMC Over ‘Unauthorised Construction’ of Her Residence, Here’s What They Found ‘Illegal’

Kangana Ranaut Receives Another Notice From BMC, Here's What They Find 'Unauthorized Construction' in Her 3 Flats in Khar.

Actor Kangana Ranaut, who is fighting against Mumbai’s civic body, Brihanmumbai Municipal Corporation (BMC) after they demolished the Queen actor’s office, has received a new notice from the BMC over ‘illegal construction’ at her home in Khar, Mumbai. As per the BMC, there is more illegal construction at her home than her office in Pali Hill. Also Read - Kangana Ranaut Says 'Big Heroes' Flashed Their Genitals And Harassed Her, Supports Payal Ghosh in #MeToo Against Anurag Kashyap

Kangana stays on the 5th floor of a building located in the Khar West and has three flats in the building. The civic body has asked Kangana to either demolish or remove the unauthorized construction or revert to the concerned civic body engineer within a month. Also Read - Why Is Kangana Ranaut Not Opposing Claims of Making 'Unlawful Alterations' in Her Office: BMC to Court

As per India Today’s report, the civic body officials state that violations of the city code at her residence are more severe than those over which her office in Pali Road was demolished. Also Read - Anurag Kashyap Denies Sexual Harassment Allegations by Payal Ghosh After Kangana Ranaut Demands His Arrest in a New #MeToo Case

Kangana’s flat is located in DB Breeze (Orchid Breeze) on 16-road in Mumbai’s Khar West and the three flats registered in her name on March 8, 2013. One flat is of 797 square feet, another is of 711 square feet and the third one is of 459 square feet. 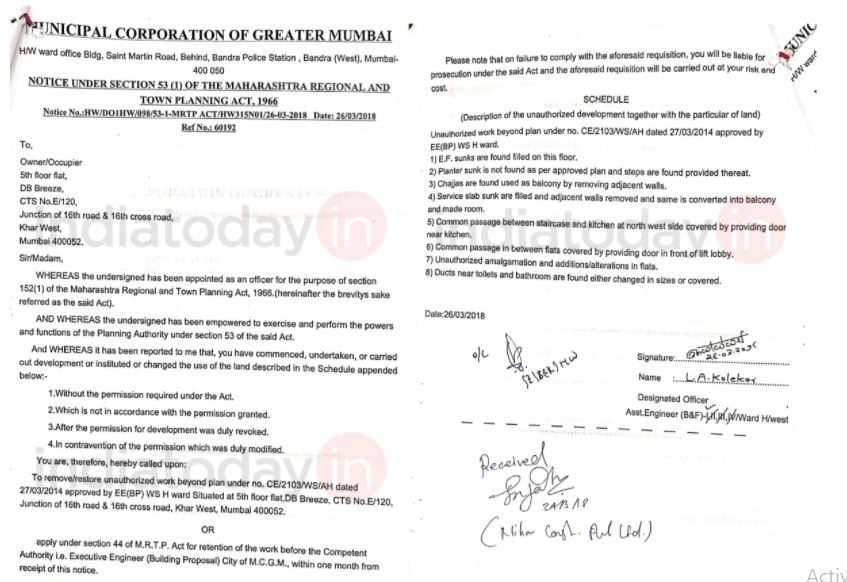 As per the BMC’s notice, EF sinks were found filled on the floor and the planter sink was not found as the approved plan. Even the steps are found constructed in a way so as to pose a threat and ‘chajjas’ are found used as balconies by removing adjacent walls. The BMC notice states that sinks are filled and adjacent walls are removed while the same has been converted into a balcony and made into a room. The common passage between the staircase and kitchen at the northwest side has been covered by providing a door near the kitchen. There is also a common passage in between the flats covered by providing a door in front of the lift lobby.

The BMC further states that unauthorized amalgamation and alterations in flats have been listed by the civic body as one of the reasons along with the ducts near bathrooms which it says that are either changed in size or covered.

The BMC has also asked a Mumbai civil court to lift the stay on the demolition of her flat. The hearing on the matter will take place on September 25.