Pooja Bhatt on Wednesday morning tweeted to remind how the Bhatt family had launched Kangana Ranaut in their 2006 production Gangster. She wrote, “As for Kangana Ranaut-She is a great talent,if not she wouldn’t have been launched by Vishesh films in “Gangster”.Yes Anurag Basu discovered her,but Vishesh Films backed his vision & invested in the film. No small feat. Here’s wishing her the very best in all her endeavours.” Also Read - MeToo Row: Payal Ghosh Thanks Kangana Ranaut For Her Support Against Anurag Kashyap, Says 'We Can Bring Them Down'

Reacting to the tweet, Kangana’s team has now launched a criticism thread on social media saying Pooja’s father, filmmaker Mahesh Bhatt, threw chappals at Kangana, called her mad and humiliated her. They also alleged that Pooja’s uncle, producer Mukesh Bhatt, is not very keen to pay artistes. “Dear @PoojaB1972, #AnuragBasu had keen eyes to spot Kangana’s talent, everyone knows Mukesh Bhatt does not like to pay artists, to get talented people for free is a favour many studios do on themselves but that doesn’t give your father a license to throw chappals at her……call her mad and humiliate her. He also announced her ‘tragic end’, Also why was he so invested in Sushant Singh Rajpoot’s and Rhea’s relationship? Why did he announce his end too, some of the questions you must ask him,” tweeted Team Kangana Ranaut. Also Read - Kangana Ranaut Says 'Big Heroes' Flashed Their Genitals And Harassed Her, Supports Payal Ghosh in #MeToo Against Anurag Kashyap

Kangana’s social media team also informed that the actress was selected for starring in Puri Jagannadh’s movie Pokiri alongside Telugu superstar Mahesh Babu at the time she auditioned for Gangster. “For your info @PoojaB1972 Kangana had also auditioned for ‘Pokiri’ alongside ‘Gangster’ and got selected for that as well. ‘Pokiri’ went on to become an all time blockbuster, so your thinking that because of ‘Gangster’ she is who she is, is totally not working. Water finds it’s level,” wrote Team Kangana Ranaut in a separate tweet. Also Read - Why Is Kangana Ranaut Not Opposing Claims of Making 'Unlawful Alterations' in Her Office: BMC to Court

Team Kangana’s tweet comes as a response to Pooja’s tweet earlier in the day where she wrote: “As for Kangana Ranaut — She is a great talent, if not she wouldn’t have been launched by Vishesh films in “Gangster”. Yes Anurag Basu discovered her, but Vishesh Films backed his vision and invested in the film. No small feat. Here’s wishing her the very best in all her endeavours.” 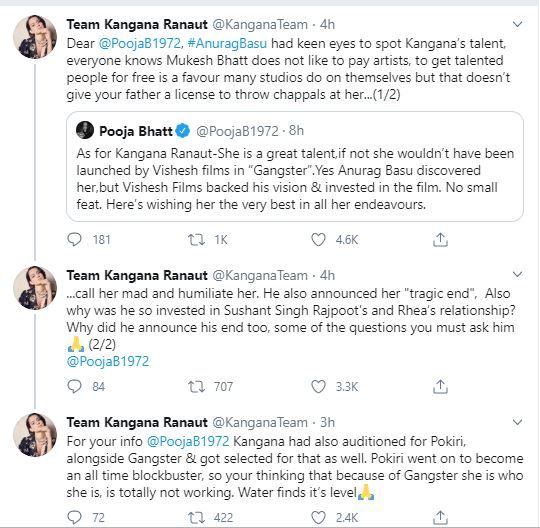 Pooja’s tweet came at a time when the Bhatt family is continuously getting trolled on social media for allegedly practicing nepotism ever since the demise of Bollywood actor Sushant Singh Rajput last month. Netizens have also threatened to boycott their forthcoming movie Sadak 2 which is directed by Mahesh Bhatt, produced by Mukesh Bhatt and stars Pooja and Alia Bhatt in key roles.