Take a look at these newsmakers.

The weekend is here and it’s time to take a look at the top 5 news of the week. A lot has been happening in the telly land this week. Here are 5 things that you can’t afford to have missed this week. From Kapil Sharma going on a Twitter rant to Nia Sharma making her Bollywood debut in a Vikram Bhatt film, here’s 5 things that rocked the TV industry, this week. Also Read - Pavitra Punia Gets Evicted From Bigg Boss 14 After Jaan Kumar Sanu?

One of the cutest couples of telly land, Vatsal Sheth and Ishita Dutta, who tied the knot on November 29 in a close-knit affair with only family and close friends attending it, are on romantic vacation. The couple, who couldn’t go on their honeymoon immediately post marriage, have finally managed to take some time out of their busy schedule and are currently on a Europe tour, having a helluva time in Europe. The duo sealed it with a kiss under the Eiffel Tower in a picture, which instantly went viral on social media. Check out the picture here: Also Read - EXCLUSIVE! Vikram Bhatt on OTT vs Theatrical Release: OTT Had Never Been Main Source of Revenue, But It Is Now

Fans can now rejoice as the actor-comedian Sunil Grover is returning with a new show titled ‘Dhan Dhana Dhan’ and the makers of ‘Jio Dan Dana Dan Live’ have released the promos and it seems quite entertaining. In the latest video, that features Shilpa Shinde and Sunil Grover, Shilpa is seen giving a few tips on cricket to Sunil, who is getting ready for a panel discussion with Kapil Dev, Virender Sehwag and others but doesn’t seem to have any knowledge about the sport. ‘Jio Dhan Dhana Dhan Live’ is a Jio original show aiming to present a mix of cricket and comedy for the Indian Premiere League 2018 season. The show stars Ali Asgar, Sugandha Mishra, Shilpa Shinde, Suyyash Rai, Paresh Ganatra, Suresh Menon and will be telecast on Colors from Sunday 11 pm.  Catch the latest promo here…

Kapil Sharma made headlines once again for all the wrong reasons. Just yesterday, the Jodhpur trial court pronounced the verdict in the 1998 black buck poaching case that involves actors Salman Khan, Saif Ali Khan, Tabu, Neelam and Sonali Bendre and has convicted Salman Khan, while acquitting other accused. As per the reports, it has been announced that the court awarded Salman Khan five years in jail for killing the endangered blackbuck in the case. While many from the film industry are awaiting the actor’s bail, actor-comedian went on an abusive rant on Twitter, leaving his fans shocked. However, later Kapil Sharma apologised saying that his account was hacked and deleted the posts. Take a look at his tweets here: 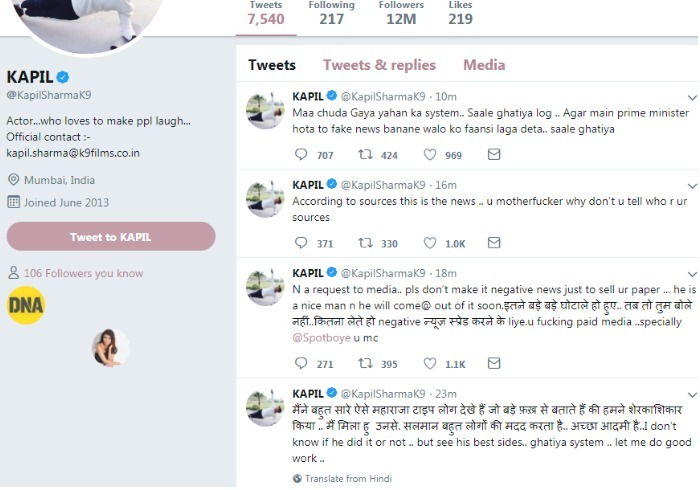 Shireen Mirza, who shot to fame with her character Simmi in Star Plus’ much-celebrated show Yeh Hai Mohabbatein, recently had put up a post stating her complete disappointment. Through a Facebook post, shared how landlords have been giving her a hard time as they have been denying her accommodation in the city on the basis of her caste, her marital status and gender, on various occasions. The actress wrote, “I am normally very chirpy and away from such things. But I was just shattered yesterday and decided to let everyone know about it. I wanted a house where I am currently located. But I was disappointed by the behaviour of few people who denied accommodation all because I was a Muslim, while there were others who did not want a bachelor in their society. Many societies said that they did not want an actor who is a bachelor and, on top of that, a Muslim.”

Television actress Nia Sharma, who shot to fame with Jamai Raja, is all set to make her Bollywood debut in a Vikram Bhatt film. Earlier, the actress has worked with Vikram in the web series titled ‘Twisted’ and ‘Untouchables’. In a statement to DNA, Vikram Bhatt’s spokesperson said, “Vikram Bhatt has just begun planning his next film after the success of his OTT platform. The thriller mastermind has just signed Nia Sharma.While details of the film are still being etched out, the actor and director will be coming together for their first full-length feature. Vikram aims to make it different from anything he has made in the past. He wants to surprise audiences with not only the story but Nia’s look in the film.”