Filmmaker Karan Johar who is receiving a lot of criticism post-Sushant Singh Rajput’s death for promoting nepotism took a long break from social media. This time, he didn’t even promote his upcoming production, Gunjan Saxena: The Kargil Girl which is slated to stream on August 12, 2020, on Netflix. However, when actor Ranveer Singh was live on Instagram with fans to celebrate his favorite English football club Arsenal’s FA Cup victory, Karan Johar joined the session and posted some LOL emojis in the comments section. Also Read - NCB Summons Dharma Productions' Executive Producer Kshitij Ravi Prasad in Drug Case

Have a look at the screenshot below: Also Read - Rakul Preet Singh's Team Confirms Receiving Summons After NCB Says She 'Made Excuses' 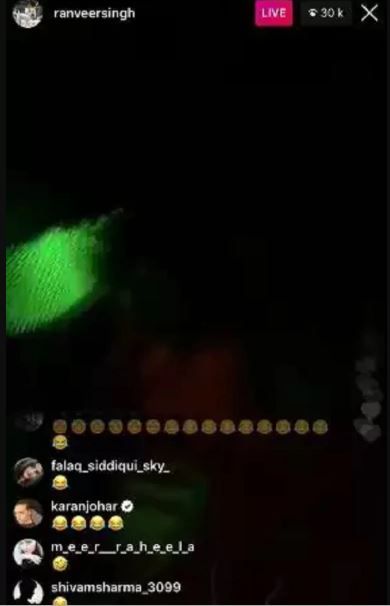 Sushant Singh Rajput’s death by suicide on June 14 has sparked debates around favoritism, nepotism and bullying in Bollywood and therefore several Bollywood biggies have been questioned by the Mumbai Police in connection with the death case. Earlier, there were reports KJo’s statement will also be recorded, but that didn’t happen.

Karan Johar had penned a long note on the late actor on social media wherein he mentioned that he ‘blames himself’ for not being in touch with Sushant in the past few months. “I blame myself for not being in touch with you for the past year….. I have felt at times like you may have needed people to share your life with…but somehow I never followed up on that feeling…will never make that mistake again…we live in very energetic and noisy but still very isolated times …some of us succumb to these silences and go within…we need to not just make relationships but also constantly nurture them….Sushants unfortunate demise has been a huge wake-up call to me …to my level of compassion and to my ability to foster and protect my equations…..I hope this resonates with all of you as well….will miss your infectious smile and your bear hug ….💔💔💔”, he wrote.