Bollywood’s Mr Perfectionist and superstar Aamir Khan rang in his 55th birthday on Saturday and his Laal Singh Chaddha co-star Kareena Kapoor Khan couldn’t hold back from sharing the quirkiest message for him. The Instagram newbie is creating quite some wave on the photo-sharing app with her recent joining and this is the first time that the diva was seen sharing a picture outside of her family. Also Read - Kareena Kapoor Khan, Karisma Kapoor, Ranbir Kapoor’s Rare Childhood Pic With Raj Kapoor is a Sight For Sore Eyes

Taking to her Instagram handle, Kareena shared a selfie featuring her in a dainty Indian suit and Aamir sleeping next to her, cuddling a pillow. The picture was taken inside an aeroplane with Aamir leaning on a window seat. Kareena captioned the picture, “My fav co-star has to be @_aamirkhan’s… pillow! (sic)” and captioned it with red heart emojis. Quick to respond, Karisma Kapoor, Tisca Chopra and Huma Qureshi commented with happy-tears emojis. Also Read - Kareena Kapoor Khan- Arjun Kapoor’s Cute Banter on Instagram Will Make You Smile 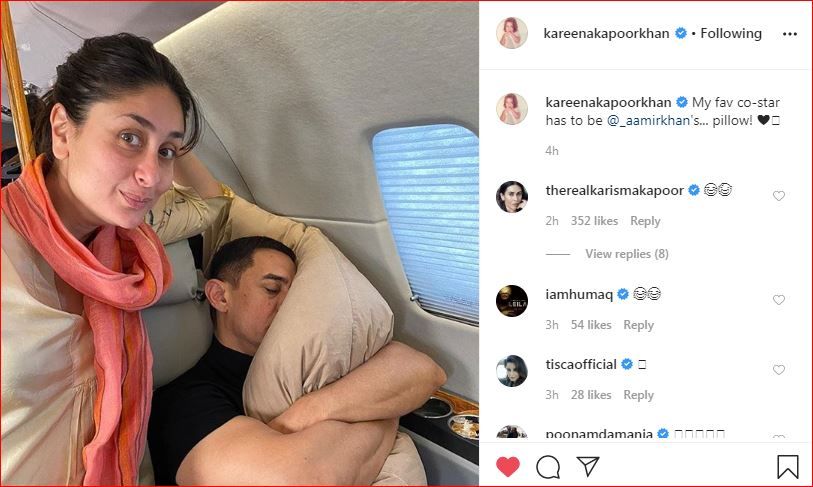 On the professional front, Aamir is gearing up for Laal Singh Chaddha. The movie stars Aamir Khan and Kareena Kapoor Khan in the lead roles and is the official adaptation of Hollywood movie Forrest Grump. The film is being helmed by Advait Chandan and has been backed by Aamir Khan and Kiran Rao. The film also stars Vijay Sethupathi in a supporting role. The film is slated to hit the silver screens on December 25 this year which will be a Christmas holiday.