Kareena Kapoor Khan is currently shooting for 'Angrezi Medium' but in between her busy schedule, she manages to spend some quality time with her family.

Despite having a busy schedule with Angrezi Medium in London, Kareena Kapoor Khan is managing her personal life with family. Pictures of the actor from the sets of the film and with the family have been doing the rounds and here is another one. In the latest viral still shared by Karisma Kapoor, Kareena looks hot and bold. In the pic, Bebo can be seen wearing a black ensemble as she posed for the selfie. She captioned the photo, “#Stunning”. With brown nude lips and no makeup look, Kareena looks beautiful as always. Also Read - Kareena Kapoor Finally Shares The Picture of Her Second Baby, Wishes 'Happy Women's Day' to All 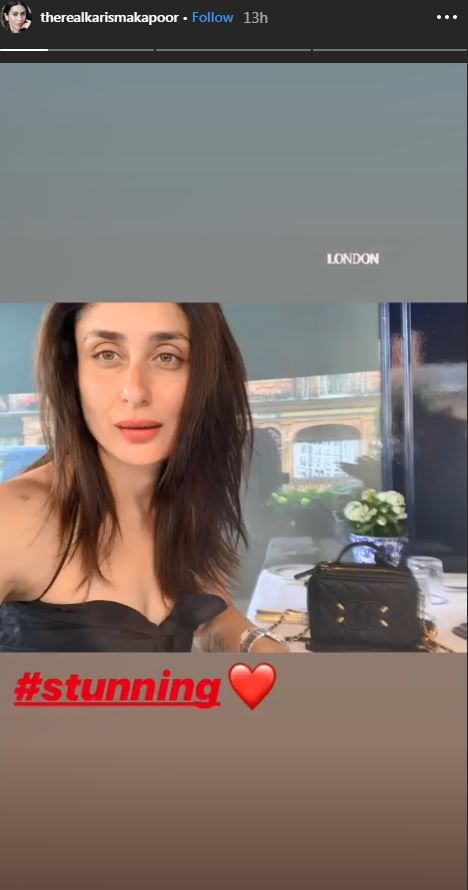 Earlier, Karisma Kapoor had shared a picture on social media in which she can be seen posing with sister Kareena Kapoor Khan, parents Randhir Kapoor and Babita and kids Samiera and Kiaan Raj Kapoor. Kareena is looking stylish as usual in a black jacket, blue denims and white shoes. On the other hand, Karisma Kapoor also looks amazing in a white t – shirt teamed up with a black jacket and denims.

Talking about Kareena Kapoor Khan’s work life, she has currently three movies lined up which include Good News, Angrezi Medium and Takht. She also features as one of the judges of the popular reality show Dance India Dance which airs on Zee TV. In a few episodes, Karisma Kapoor will be replacing Kareena as the judge of the show very soon. Karisma said, “Filling in for my gorgeous sister as guest judge on DID”.

Angrezi Medium is slated to release theatrically on April 24, 2020.