Kargil Vijay Diwas 2020: Captain Vikram Batra’s Story, All You Need to Know About The War Hero Before Rooting For Sidharth Malhotra’s Shershaah

Kargil Vijay Diwas 2020: Captain Vikram Batra was ordered to take rest when he insisted on climbing up and join his fellow soldiers in the battle. While chanting 'Durga Mata Ki Jai', he came face-to-face with the enemy and killed them all in hand-to-hand combat.

Kargil Vijay Diwas 2020: India-Pakistan war of 1999 – known as the Kargil War could not have been written without the sacrifice of Captain Vikram Batra, the bravest of the brave soldiers who was awarded a posthumous Param Vir Chakra, India’s highest military honour by the government. His story of valour is now being adapted into a Hindi film and actor Sidharth Malhotra is playing the celebrated army officer. Titled Shershaah, the film is directed by Vishnuvardhan and written by Sandeep Srivastava. Also Read - From Brahmastra To Bunty Aur Babli 2, Here Is The List Of Much-Awaited Bollywood Films That Will Release In 2021

A mainstream Bollywood film is expected to have certain elements to make it suitable for the audience. However, those who have heard of Captain Batra’s story say that his real-life was no less than a Bollywood film already. Captain Batra was the man of principles and had found a purpose in life when he decided to join the Indian army at a very young age. His sole idea behind taking admission in MA English course at the Panjab University was to prepare for the Combined Defence Services Examination. So, when in 1996, he passed the CDS examination and became one of the top 35 candidates in the Order of Merit, he left the University after completing a year and joined the Indian Military Academy. Also Read - From Maidaan to Prithviraj, Here's The List of Biopics Releasing in 2021 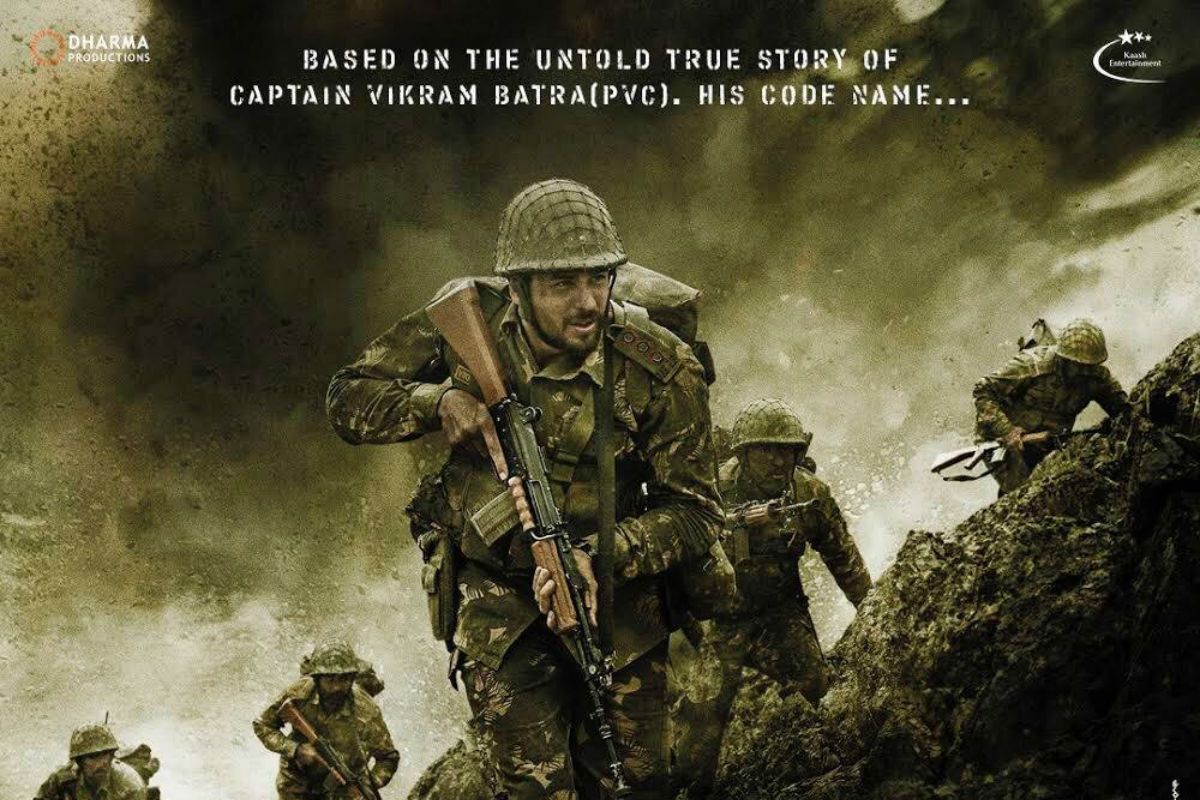 His last visit to his home in Palampur before going to the war was in March 1999 during Holi celebrations. This was also the last time he met his family members and fiancee Dimple Cheema who later told the media what the Captain had told him when she asked him to be safe at the war. Maintaining his heroic calm, he had told Cheema: “I’ll either come back after raising the Indian flag in victory or return wrapped in it. But I’ll come back for sure.”

When the war broke in Kargil, Batra, and others from his battalion were asked to move to Dras in Jammu and Kashmir. He began his Kargil journey as the lieutenant but after capturing Point 5140, he was promoted to the rank of captain.

What is significant to know about the Captain’s Kargil journey is that once he captured the Point 5140, he was ordered to move to Ghumri and rest with his fellow soldiers. However, as the war continued and reached a point when the enemy began to acquire a strong foothold, the Captain decided to take the charge once again and protect his other fellow soldiers. Going to Point 4875 where the Indian soldiers seemed stuck was not in the captain’s orders and yet when he heard the situation, he decided to go beyond his call of duty. 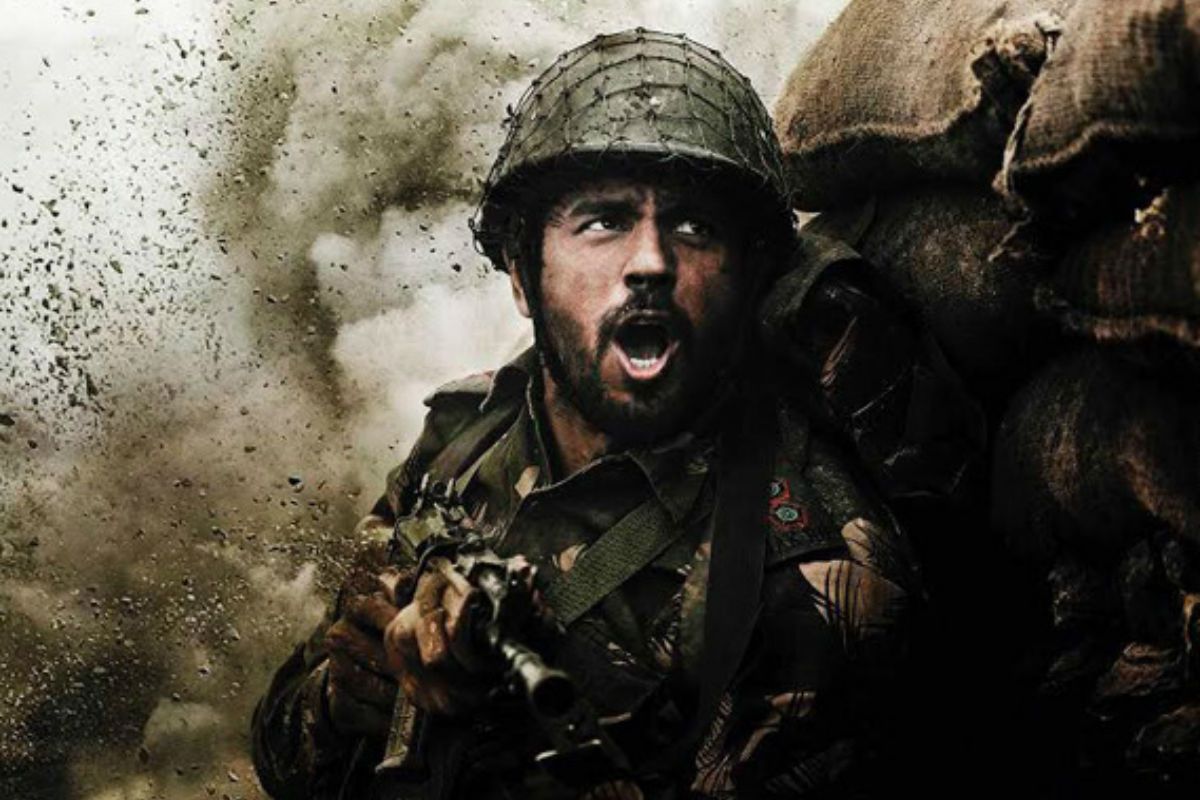 On the afternoon of July 5, Captain NA Nagappa had reached the Flat Top with his small force and got seriously injured. It is believed that splinters had pierced through both his legs and he fell unconscious. Captain Batra, who was aware of this, went to Lt. Colonel Joshi to seek permission to ‘go up.’ He was still recuperating from the injuries of the last battle and was unwell. Lt. Joshi had his reservations but Batra remained adamant and seeing his valour, a few other soldiers from the battalion also requested to join him at the battle.

As per a JAK RIF officer, “Despite strict rules, where soldiers cannot question the orders of their seniors, several soldiers literally pleaded for permission to accompany Batra even at the cost of earning severe displeasure of the commanding officer. The soldiers were so moved that they were willing to be jailed or court-martialled but only wanted permission to accompany Batra and reinforce the army on top of the peak.”

Before climbing up, Batra and his 25 men of the D coy prayed at the Goddess Durga temple and began to go up. Among the many stories of Batra’s bravery that are shared by his fellow soldiers, one his quite prominent. It is believed that when the enemy got to learn about Batra climbing up, they broke into the Indian wireless system and said, “Shershaah don’t come up”.

“Our radio sets were on the same frequency. One of the Pakistani soldiers, whosoever he was, he used my code name Shershaah and said, ‘Oh Shershaah you’ve come, don’t try to come up or you will have a tough time.’ That was the time they gave us a challenge. And my guys, they went wild. How dare the Pakistanis challenge us!” narrated Captain Batra in an interview to NDTV.

It was snowing when the captain led his troops to what is now known as the ‘Batra Top.’ The enemies had created multiple sangars around the top and they were firing heavily on the highway that connected Srinagar to Leh. Destroying the machine guns that the enemies were using to trap the Indian soldiers, he kept moving ahead and reached the ledge where the Captain decided to make a direct daylight frontal assault. He had saved Nagappa by now.

Recalling how Captain Batra saved him, Captain Naveen had told ET: “I was sitting on a bunker when the enemy threw a grenade, which landed near my leg. When it exploded, I felt a defeating sound in my ear. Vikram came running to me and said ‘Anna don’t be scared I have come’. He dragged me out and I saw him climbing up the hill.”

At a heavy risk of losing his life, the captain moved on and faced enemy’s machine guns and grenade launchers. As revealed by his fellow soldiers, he kept chanting ‘Durga Mata Ki Jai’ while firing from his AK-47. Even after sustaining deep injuries, he continued to fight and reached the entrance of the sangar. In hand-to-hand combat, he killed five Pakistanis. Firing continued from another ledge and Batra moved to silence the enemy there. He killed all four members of the crew who were charging heavy machine gunfire. However, during the attack, one of the soldiers, Sub. Raghunath Singh was shot. Batra, protecting his fellow man, moved ahead and came face-to-face with the enemy. While he killed the enemy, he got a bullet in his chest and his forehead. The Captain succumbed to his injuries. 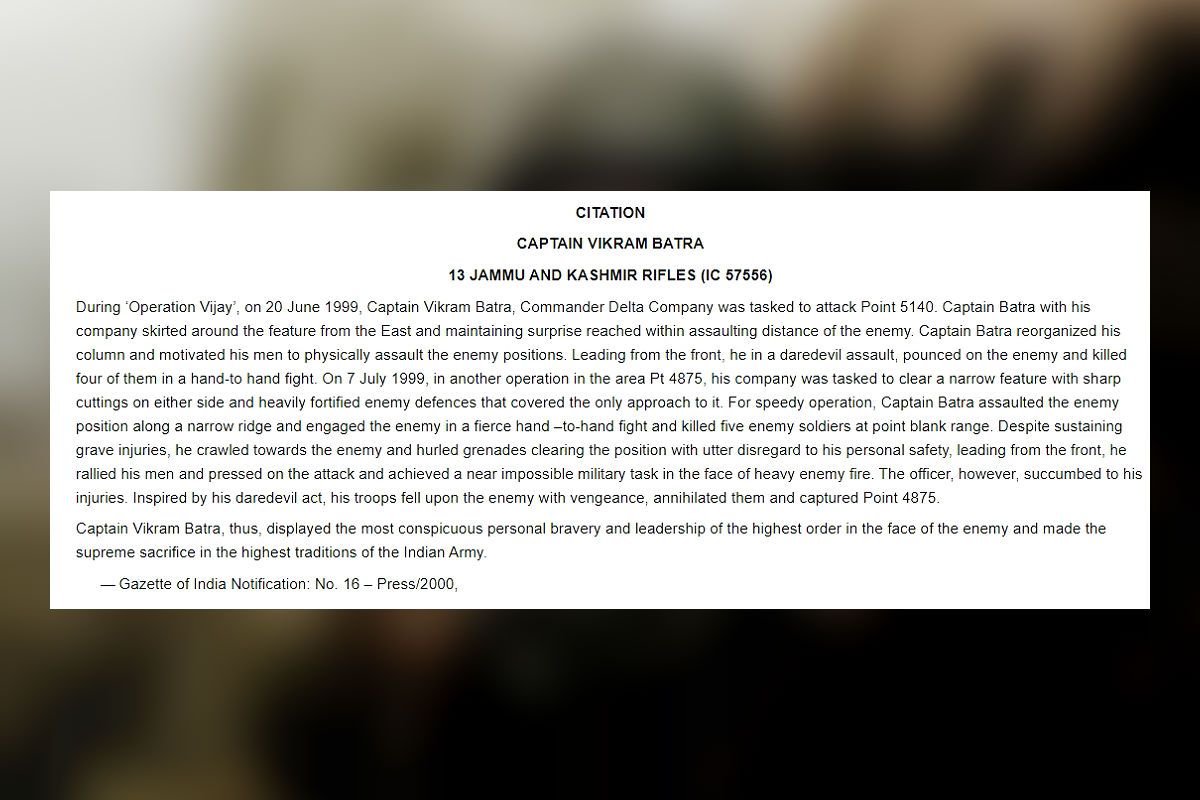 Before Sidharth Malhotra, actor Abhishek Bachchan played the role of Captain Vikram Batra in JP Dutta’s film LOC Kargil that released in the year 2003. Shershaah, that’s now being made by Dharma Productions also features Kiara Advani in the role of the Captain’s fiancee Dimple Cheema.