Bollywood diva and late actor Rishi Kapoor’s niece Karisma Kapoor shared adorable throwback photos with uncle Rishi as she remembers him after his unfortunate demise. In the photos, which are from the 70s and 90s, we see Karisma posing with the Bobby actor and they both are looking amazing. While in the photo from the 70s, Karisma is playing with Rishi as a little girl and in the photo from 90s, she is all grown up and all smiles in the picture. Also Read - Neetu Kapoor Shares Another Emotional Note on Rishi Kapoor's Battle With Leukaemia, Says 'It Was Full of High Emotion' 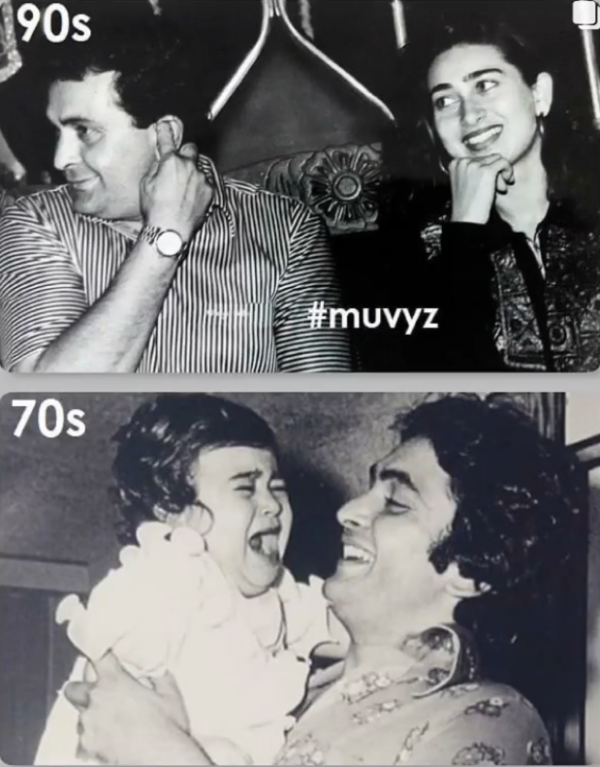 Also Read - Rishi Kapoor Would Have Wanted People to Fight Over Giving a Shoulder to His Bier, Says Filmmaker Nikkhil Advani

Rishi Kapoor’s demise is a big loss for the film industry and the nation. He was one of the most talented actors in the industry who is known for starring in over 90 movies. Also Read - Throwback Video: Neetu Kapoor Reveals Rishi Kapoor Could Never Have an Affair, Says 'He Could Never Impress Anyone But Her'

After Rishi Kapoor’s demise, his wife Neetu Kapoor thanked all the doctors and medical staff who looked after Rishi in the Mumbai hospital and wrote, “As a family we have a deep sense of loss.. when we sit together and look back at the past few months what we also feel is immense gratitude – gratitude towards the doctors at HN reliance hospital! The whole team of doctors, brothers and nurses headed by Dr Tarang Gianchandani treated my husband like he was their own – they advised us like we were their own.. and for all that and more I thank them from the bottom of my heart.” Post the funeral, Ranbir Kapoor, Alia Bhatt, Riddhima Kapoor, Neetu, and filmmaker Ayan Mukerji were snapped immersing Rishi’s ashes in the Banganga and later, a prayer meet for the actor was held and during the prayer meet, Ranbir Kapoor was snapped wearing a turban. For all those who don’t know, Rishi Kapoor died on April 30, 2020, at the age of 67 in Mumbai as he was diagnosed with leukemia in 2018 and was undergoing treatment in New York.