Kartik Aaryan flies off to Lucknow on Holi 2020 for Bhool Bhulaiyaa 2 shoot but not before dropping the news in a quirky manner, Pati Patni Aur Woh co-star Bhumi Pednekar left smitten

Injured hand no bar, Bollywood hunk Kartik Aaryan left to shoot for Anees Bazmee-directorial, Bhool Bhulaiyaa 2, in Lucknow on Holi 2020. Posing with his fractured hand before he flew off, Kartik was seen leaving Pati Patni Aur Woh co-star Bhumi Pednekar left smitten with his creativity at coming up with a quirky caption.Also Read - IPL 2022: From CSK to KKR, Remaining Purse of IPL Franchises Ahead of Mega Auction

Taking to his Instagram handle, Kartik shared a picture featuring him wearing a mask in the wake of the rising Coronavirus cases in India. Posing with his fractured hand that sported, “DONT TOUCH PROPERTY” written on the plaster, Kartik took the selfie keeping his hood on. He captioned it, “Flying again Best of Luck-Now #BhoolBhulaiyaa2 #Lucknow schedule #CoronaStopKaroNa #WashYourHands (sic).” Quick to respond, Bhumi commented, “Wah kartik ji thats some thought luck-now @kartikaaryan has the best captions (sic).” Also Read - ’Shehzadi in The House!' Kriti Sanon Joins Kartik Aaryan For Shehzada in Delhi 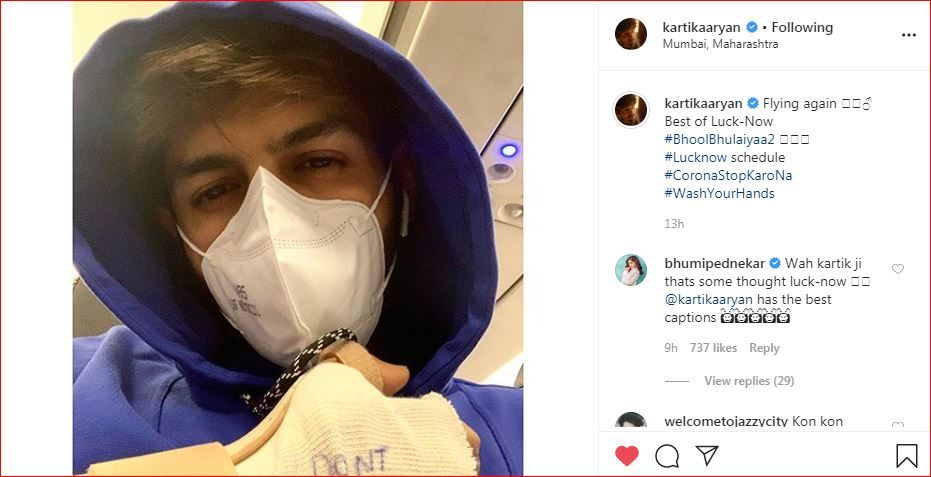 Kartik Aaryan, who injured his right arm on the sets of a popular dance reality show, is currently seen wearing an arm cast. The actor recently went through a surgery for his injured arm and was even seen getting a cute scolding from his mom for not wearing his sling in a video shared by one of Kartik’s fan pages on Instagram. As per the reports, Kartik is accompanied by his mom to Lucknow due to his injured arm.

The team of Bhool Bhulaiyaa 2 was in Jaipur last month for a 10-day shoot schedule after which they decided to head to Lucknow to shoot at a palace. As reported earlier, director Anees Bazmee took a lot of time to select the palace and found a suitable one in Lucknow. The shoot in Lucknow will end in mid-April with a few scenes left to be shot in Mumbai.

Apart from Kartik Aaryan, Tabu and Kiara Advani will also feature in the film. Actor Rajpal Yadav, who played the character of Chhota Pandit in the first film, will return to play another comic role in the new film.