Kartik Aaryan has given a new twist to his Pyaar Ka Punchnama monologue and celebs are liking it. Check here.

Bollywood actor Kartik Aaryan is making headlines for sharing a ‘stay safe’ and ‘social distancing’ monologue just like in the film Pyaar Ka Punchnama amid COVID-19 pandemic. The actor urged people to adhere to social distancing for containing the spread of coronavirus. In the Instagram clip shared on Thursday, Kartik Aaryan exhausted the public in his own unique manner to act responsibly and refrain from socialising and venturing out unnecessarily. Also Read - How Boris Johnson's Pregnant Fiancee Carrie Symonds Battling COVID-19 as he Goes in ICU Leading Severely Tough Times Ahead

Kartik Aaryan also tagged Prime Minister Narendra Modi in his post, expressing solidarity with the government’s efforts to overcome the crisis. The caption of Aaryan’s post read: “#CoronaStopKaroNa. My Appeal in my Style Social Distancing is the only solution, yet @narendramodi we are with you, Sir !!” Also Read - Coronavirus: Delhi Government Seals Cancer Institute After Doctor, 9 Staffers Test Positive

My Appeal in my Style Social Distancing is the only solution, yet 🙏🏽 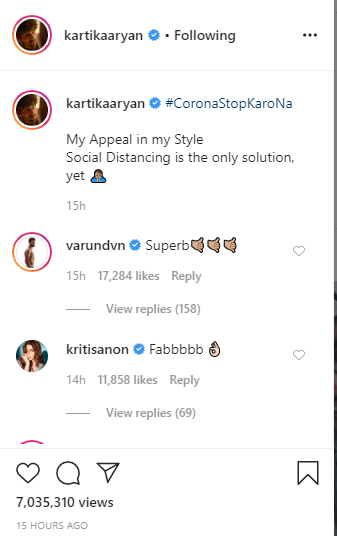 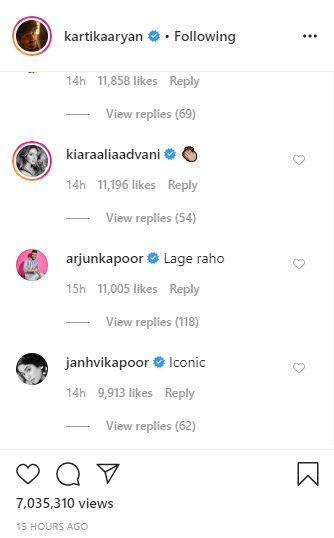 The actor’s appeal comes as the total number of COVID-19 patients in India has crossed the 195 mark.

On the work front, Best Actor in Comic Role trophy at Zee Cine Awards. Taking to his Instagram handle, Kartik shared a picture from the event, flaunting the trophy. He captioned it, “#ChintuTyagi ne jitaya (Chintu Tyagi won this for me) Best Actor in a Comic Role @zeecineawards “Pati ka role kyun karna hai? Muchhon wala character kyun karna hai? Weight kyun badhana hai?” Isiliye doston, isiliye!! (Why do you want to play a husband? Why play a character that sports a moustache? Why gain weight? For this my friends, for this)” sic.

Pati Patni Aur Woh is a romantic comedy film produced by Renu Ravi Chopra. It is a remake of the 1978 marital comedy Pati Patni Aur Woh. In the new version of the film, Kartik plays the role of Abhinav Tyagi AKA Chintu Tyagi who is not a usual confident casanova but an IIT topper and a government employee.

Kartik is currently shooting for Anees Bazmee-directorial, Bhool Bhulaiyaa 2. The team of Bhool Bhulaiyaa 2 was in Jaipur last month for a 10-day shoot schedule after which they decided to head to Lucknow to shoot at a palace. As reported earlier, director Anees Bazmee took a lot of time to select the palace and found a suitable one in Lucknow. The shoot in Lucknow will end in mid-April with a few scenes left to be shot in Mumbai.