Katrina Kaif and Akshay Kumar starrer Sooryavanshi is currently in progress. Both the actors are shooting for the film and it is already in the buzz with its ‘Tip Tip Barsa Pani’ song remake. Earlier today, Katrina took to Instagram to share a picture along with Akshay and it surely hints at the inclusion of ‘Tip Tip Barsa Pani’ remake in the film. In the photo, Bollywood hit jodi are seen with their heads wrapped in a towel and are all smiles as they pose for the camera. Also Read - Durgamati Trailer: Bhumi Pednekar Impresses in This Not-so-Scary Drama With a Haunted Haveli, Wandering Soul And Political Conspiracy

Also Read - Siddhant Chaturvedi On Working With Deepika Padukone: I Am Living Out Of A Dream In Every Possible Way 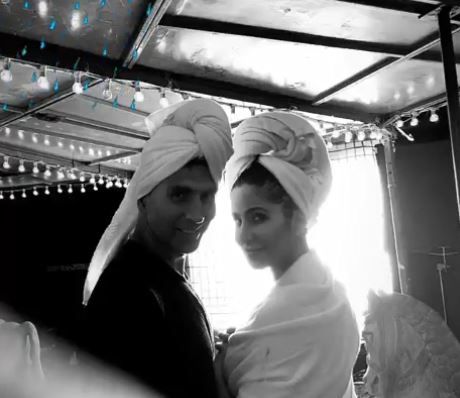 As soon as the picture was shared on social media, fans couldn’t keep calm and started asking questions such as, ‘It would be raining tip tip’, ‘R u shooting forTip Tip barsa paani remake?’

Earlier, Akshay posted a throwback picture with the head honcho of Venus, Ratan Jain, who owns the rights of the original number. Parting with it due to his 30-year-long association with the actor, Ratan saved Akshay from being “disappointed.” The post was captioned, “‪I would’ve definitely been disappointed if any other actor would’ve recreated #TipTipBarsaPaani, a song which has been synonymous with me & my career and I can’t thank Ratan Jain ji enough. At times like these you realize, we may have come a long way but we also go back a long way” (sic).

I would’ve definitely been disappointed if any other actor would’ve recreated Tip Tip Barsa Paani,a song which has been synonymous with me & my career & I can’t thank Ratan Jain ji enough. At times like these you realize,we may have come a long way but we also go back a long way pic.twitter.com/UtH5iDS0i9

‘Tip Tip Barsa Pani’ was also filmed in the rain and originally featured Akshay and Raveena Tandon in 1994 film Mohra.