Katrina Kaif Sparks Pregnancy Rumours Again As She Gets Spotted At Airport In A Loose Outfit, Fans Say ‘Hope They Announce Soon’

Katrina Kaif was papped while she was exiting the Mumbai airport. She wore a loose white tee-shirt with a pair of baggy red joggers.

Katrina Kaif Pregnancy News: Katrina Kaif was recently spotted by the paparazzi while exiting the Mumbai airport. The 39-year-old actress opted for casuals for her airport look, however she once again sparked pregnancy rumours due to her baggy clothes. For the unversed, Katrina Kaif got married to Vicky Kaushal on December 9, 2021, and since then their fans have been impatiently waiting for them to share the ‘good news’. From the last 2-3 months the actress ignited pregnancy rumours on various occasions as always use to get spotted in public donning loose clothes! And once again fans spotted Katrina concealing her ‘baby bump’ under baggy clothes. 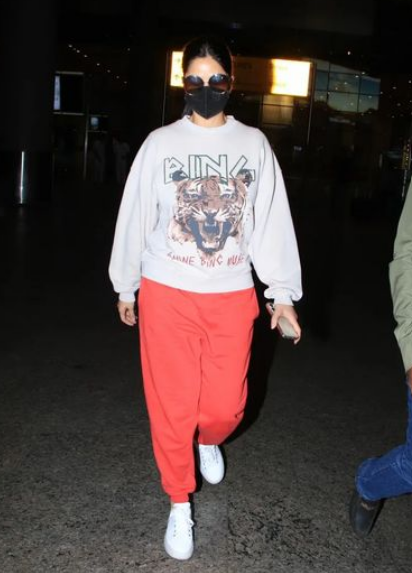 Also Read - Was Katrina Kaif's Instagram Hacked And Who is Camedia Moderatez? Fans Scratch Their Heads!

This time, Katrina was papped while she was exiting the Mumbai airport. She wore a white tee-shirt with a pair of red joggers, she completed the look with white sneakers. The ‘Tiger 3’ actress was also seen wearing a pair of shades and a black mouth mask, keeping Covid-19 protocols in mind.

Soon as pictures and videos of Katrina surfaced in media, her fans started speculating about the actress being pregnant! A user commented: She is definitely pregnant, another user wrote: hope they announce soon.

Last month Katrina celebrated her birthday with hubby Vicky Kaushal, filmmaker Kabir Khan and few others in Maldives. On work front the actress will be next seen in ‘Phone Booth’ alongside Ishan Khatter and Siddhanth Chaturvedi.