Kedarnath Does Not Intend to Hurt Anyone’s Sentiment, Say Makers of Movie After Call For Ban

A BJP leader had demanded the movie be banned because according to him it promoted love jihad.

Kedarnath does not intend to hurt anyone’s sentiments, the makers of the Bollywood movie said on Monday, just days after a BJP leader demanded a ban on the film accusing it of promoting ‘love jihad’. At the trailer launch of the movie in Mumbai, producer Ronnie Screwvala and director Abhishek Kapoor defended the film which features Sushant Singh Rajput and marks the Bollywood debut of Sara Ali Khan, daughter of Saif Ali Khan and Amrita Singh. Also Read - Ankita Lokhande Releases Explosive Video For Sushant Singh Rajput’s Fans, Says ‘Gaali Mat Dijiye’

The movie, which is scheduled to release on December 7, had also faced some problems from the priests of Kedarnath after they demanded it be banned. Also Read - Rhea Chakraborty Has a Message For All, Wears Sweatshirt That Says ‘Man Up’ - Check Pics

“Firstly till date, nobody has approached us with anything that we can clarify. Secondly, our onus is to get the film censored and certified by the CBFC which is the sole body to decide on the film and thirdly, we all are creative people and we are Indians first. I do not think anyone of us will hurt any sentiment,” Ronnie said. Also Read - Sara Ali Khan Visits Ajmer Sharif With Mom Amrita Singh, Wishes Fans 'Jumma Mubarak' 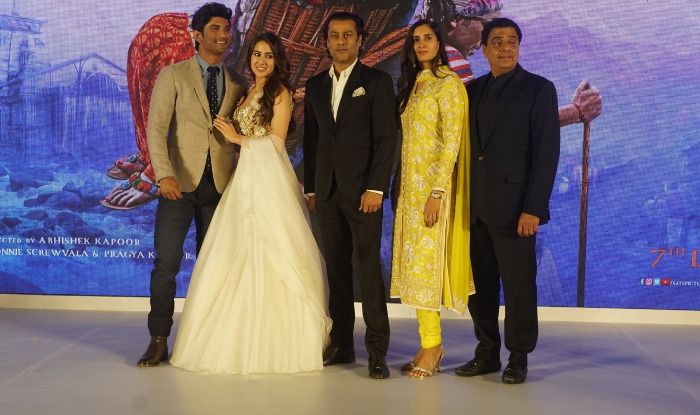 A BJP leader last week wrote a letter to the censor board chief Prasoon Joshi, bringing his attention to the setting of the film, a tragedy that took place in 2013 at Kedarnath, a Hindu pilgrim centre, and its narrative wherein a Muslim boy falls in love with a Hindu girl. Ronnie has urged people to watch the film before making an opinion.

“I think controversy starts on any film before people watch it. I do not know how after just 60 seconds of watching the film (referring to the teaser), somebody forms such an opinion. Let somebody comment after watching the film, and we will be happy to give our feedback,” he added.

Kapoor said: “We just released the teaser earlier, and now people can see a little more about the film in the trailer which clearly shows that there are no such things. We have shown a lot of love there in the film. When people see a teaser, they at times form their perspectives and opinion on that… But when they will watch the film, they will understand that we never intended to hurt anyone’s sentiment.”

Sushant and Sara were also present at the launch of the trailer.