Khatron Ke Khiladi 11 winner: Reality show Khatron Ke Khiladi season 11 has been a star-studded affair with contestants like Rahul Vaidya, Arjun Bijlani, Divyanka Tripathi, Abhinav Shukla and Shweta Tiwari being part of the show. The show entertained the audience since the past two months. The finale of KKK11 was shot recently in Mumbai. Hosted by director Rohit Shetty, KKK 11 has its winner ready and there are reports all over the social media that Arjun Bijlani has bagged the trophy.Also Read - Bigg Boss 15: Nikki Tamboli Argues With Karan Patel and Arjun Bijlani, Says 'Pratik Akela Sher Ki Tarah Khel Raha Hai' 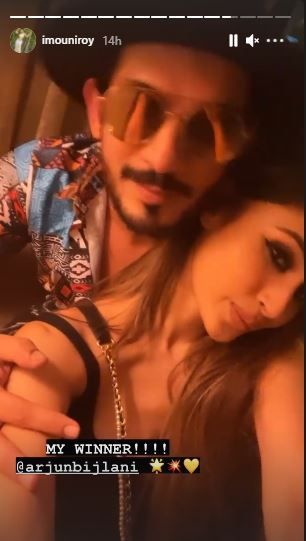 Infact, Arjun’s wife Neha Swami Bijlani took to her IG page to share a picture of the KKK 11 winner’s trophy received by her husband. The trophy is shaped in the form of a lion with a flag behind it saying, Darr vs Dare. Its written ‘Winner | Season 11’ on the trophy. Neha also shared a picture with Arjun in another post and wrote, “I’m soooooo proud of you my jaan… I know what you have done really.. you deserve all the happiness in the world.. @arjunbijlani (sic).” Also Read - Bigg Boss 15 Weekend Ka Vaar: Salman Khan Lashes Out At Pratik For Breaking Bathroom Lock While Vidhi Was Taking Bath

Have a look at the trophy: 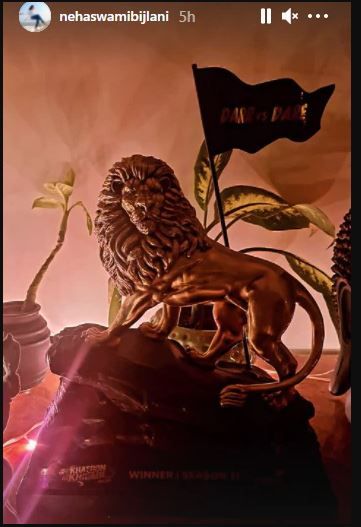 The finale of Khatron Ke Khiladi 11 is set to premiere on September 25 and September 26 on Colors at 9:30pm, but the channel hasn’t announced the winner yet.