Sonam Kapoor recently made an appearance on the sets of the popular TV show, Comedy Nights With Kapil. 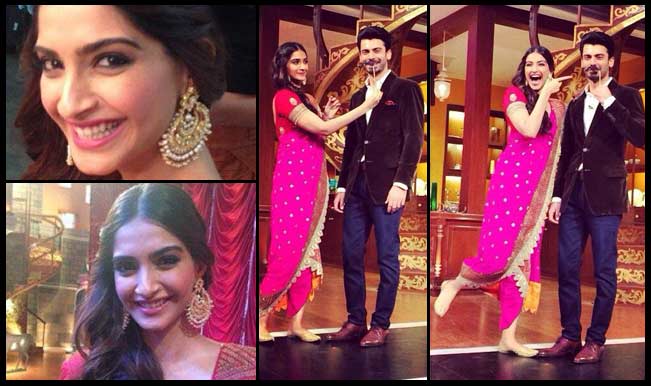 Sonam Kapoor, the actress who’s sense of style never fails to impress us, recently made an appearance on the sets of the popular TV show, Comedy Nights With Kapil. The gorgeous actress, along with her Pakistani co-star Fawad Khan were seen promoting their forthcoming movie Koobsurat with the Sharma parivaar. Also Read - Sonam Kapoor's Cousin Priya Singh Files FIR Against Caretakers For Beating up Handicapped Dogs at Her Shelter

Sonam Kapoor, who never goes wrong with her dressing sense, looked pretty in a pink Anamika Khanna fusion sari. The sari which was draped like a dhoti between her legs, had a thick bandhani border layered with zari frills. With middle-parted hair on one side, Sonam revealed her beautiful ‘chaand bali’ earrings which completed her chic look. The prince charming from Pakistan, Fawad Ali Khan, sported plain denims and a crisp white shirt. The actor, who makes girls go weak in their knees, has become an extremely popular face in India, thanks to his famous television show, Zindagi Gulzaar Hai. Also Read - Mouni Roy Looks Casual and Chic in a Little Black Dress

While it is a well-known fact that all Bollywood stars promote their films on Comedy Nights With Kapil, we were a little surprised when the lead pair of Koobsurat Sonam and Fawad visited the mad house just after the offical launch of the first trailer.