Kiara Advani is back to Delhi University to shoot for her next project post Kabir Singh.

Shahid Kapoor and Kiara Advani are currently busking on the success of their recent release Kabir Singh. Most of the film’s shooting was done at various colleges of Delhi University and recently, the actor visited one of the colleges under DU and felt nostalgic. Also Read - Kiara Advani Wears a Gharara Set Worth Rs 98,000 by Designer Arpita Mehta For Laxmmi Bomb Promotions - Yay or Nay?

The Lust Stories actor is back in the national capital to shoot for her next film. She took to Instagram to share a picture of Miranda House and captioned it, “Memories… Miranda House college. Had shot here for ‘Kabir Singh’ and now back here for the next one.”. Also Read - Laxxmi Bomb's Burj Khalifa Song Out: Akshay Kumar, Kiara Advani Romance in Dessert, Fans Call it 'Chartbuster Hit' 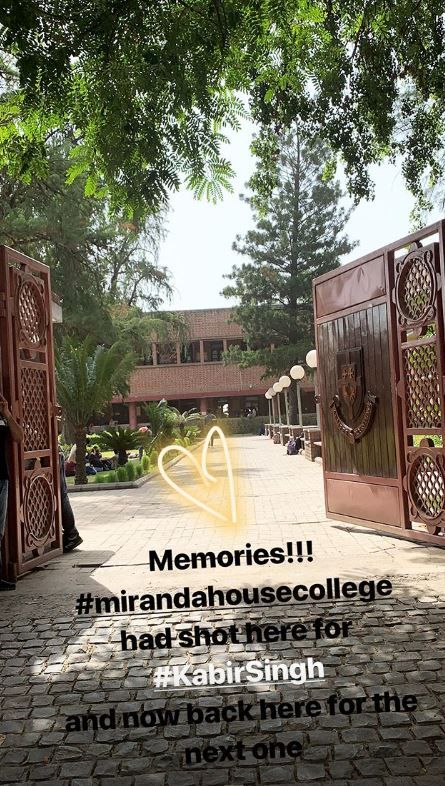 Kabir Singh is the biggest opener for both Shahid and Kiara. The film has crossed the Rs 150 crore mark, making it the third highest grosser of 2019. Also Read - Can You Guess the Price of Mira Rajput’s Boho Style Vintage Kutchi Embroidered Top?

Kabir Singh is the Hindi remake of Telugu hit film Arjun Reddy, starring Vijay Deverakonda. Both the films have been directed by Sandeep Vanga. The male protagonist in the film finds himself unable to handle his life after his girlfriend marries another man due to family pressure. The film also highlights the issues of mental illness and caste differences.