Bollywood actor Kiara Advani has recently made her debut in ace photographer Daboo Ratnani’s calendar 2020 and since then, netizens are targeting her. The Kabir Singh actor was purportedly nude, with only a leaf to cover her modesty. Her bold avatar has not left the Twitteratti speechless, in fact, a meme fest has begun. Many users trolled Dabboo copying international photographer Marie Barsch’s similar photoshoot. Also Read - Alia Bhatt Looks Alluring in Turquoise Micro Pleated Dress Worth Rs 20,000 For Dabboo Ratnani's Calendar

Kiara’s topless photoshoot bore a striking similarity to International photographer Marie Barsch and therefore Twitterati slammed Dabboo Ratnani for plagiarising Kiara Advani’s bold shoot as the concept was designed by Marie Barsch. “Daboo is a copy cat. He copied the photography concept of Marie Barsch,” a user commented. Another one wrote: “Daboo Ratnani is a plagiarist”. Not only this, internet users have made a collage of Kiara’s photograph and Barsch’s clicked picture to show the similarity between both the concepts. Also Read - Kiara Advani Flaunts Her Absolutely Hot Topless Look For Dabboo Ratnani Calendar | See Pic

Sharing a screenshot of one such collage, Barch even reportedly took to Instgaram handle to express her disappointment. “I just leave that here,” Barch wrote. Also Read - Sunny Leone Looks Smoking Hot in Little Peach Dress From Dabboo Ratnani's Calendar 2021

International photographer Marie Barsch has called out Dabbu Ratnani for plagiarising the topless pic with leaf. Even the hair remained slicked back..

Can we expect ANYthing original from these people? pic.twitter.com/4aQWw6ZBcZ

Take a look at the screenshot: 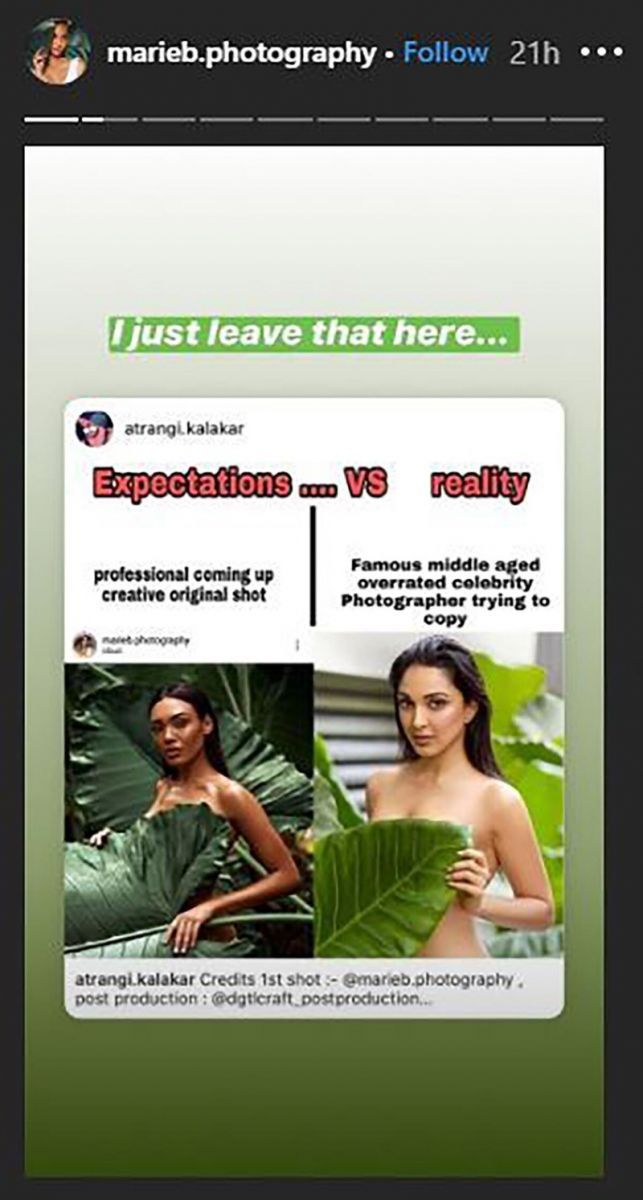 On the professional front, Kiara was last seen in the laughter riot, Good Newwz, that featured her alongside Akshay Kumar, Kareena Kapoor Khan, and Diljit Dosanjh. The film was directed by Raj Mehta who made his directorial debut with the movie. It was produced by Karan Johar under Dharma Productions.

Next up, Kiara has wrapped up shooting for the Vikram Batra biopic titled Shershaah opposite Sidharth Malhotra. She has been roped in to star opposite Kartik Aaryan in Bhool Bhulaiyaa 2.

She joins hands with Akshay Kumar again in Laxmmi Bomb which is a horror-comedy that is based on Tamil horror film Kanchana: Muni 2.

Apart from this, she will also be seen in Netflix’s original film, Guilty.