Emraan Hashmi, Nargis Fakhri and Prachi Desai are all excited about Azhar. India.com caught up with the stars.

Emraan Hashmi, Nargis Fakhri and Prachi Desai are all excited about their new release Azhar, based on the controversial period in the life of cricketer Mohammad Azharuddin. The three stars were very happy and in a fun mood at the promotional interviews of the film. India.com caught up with the Bollywood actors, and guess what Nargis Fakhri revealed to us! The sexy beauty, who was bombarded in other interviews with questions on her comment on finding kissing Emraan “gross”, revealed to India.com on video, “Emraan! Kissing him with a moustache was wonderful. I don’t wanna hurt his ego any more, so I have to be very nice to him!” This was on a lighter note, of course. Nargis went on to take Emraan’s case. “Emraan is a lovely person,” she said, “And he looks better with his own moustache!” Also Read - BCCI Faces Backlash For Not Giving Proper Clarity Over Rohit Sharma's Injury and Availability For Australia Tour

Prachi Desai jumped in and added, “Emraan is the prettiest out of all of us!” Nargis agreed. “He’s the coolest, the funniest and has the cutest smile out of us three!” she said. “Emraan plays the best cricket!” Prachi added. All this fun unfolded when we tried to dig out the pranks and the fun on the sets of Azhar, and Emraan got all serious and said it was nice to work with the ladies. “What about all the nice things we asked you to say about us? Where are all those?” Prachi demanded! Also Read - Mohammed Siraj Wants to Help India Beat Australia And Pay Fitting Tribute to Our Father, Pacer's Brother Ismail

“Did you say any nice things about me? All you said was kissing, kissing, kissing!” Emraan said to Prachi in what was an obvious taunt to Nargis! “Say some nice things,” said Emraan, which is when Nargis got talking on kissing Emraan. Watch the fun interview here! Also Read - N Srinivasan And Amit Shah Are Effectively Running Indian Cricket; Board Steeped in Nepotism: Ramachandra Guha

In the fun interview, on a serious note Emraan Hashmi tells how the film Azhar has his character chalked out from the time Azharuddin was a teenager to when he got into the Indian cricket team at 21 or 22, to his first three test centuries and his nine years as the captain of the Indian cricket team. The film finally shows the match-fixing scandal in which Azhar was embroiled in, in 2000, where he had to leave the game forever on his 99th test match.

“Azhar fought a court case against the matchfixing allegations for almost 12 years,” informs Emraan, adding that he was acquitted in 2012. “The film documents the journey of Mohammad Azharuddin.” 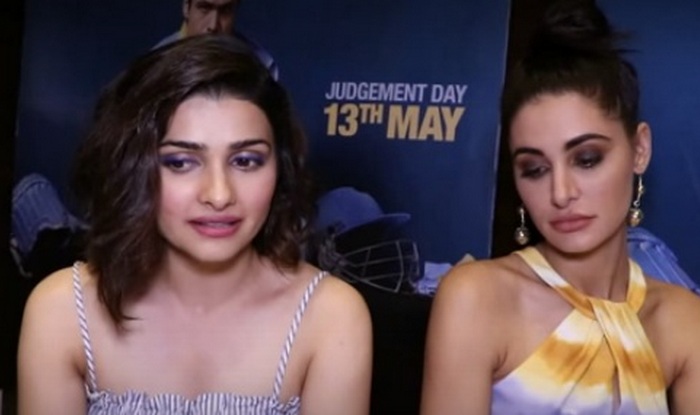 Prachi Desai revealed details of her character – Azhar’s wife Naureen. “I play Naureen, and I think not many people know much about her. All they are aware of is that she was his first wife. Because, she was somebody who was so private and never came into the limelight. I like how the film throws light on that phase of Azhar’s life.”

Is there something also on one of Azhar’s sons that he lost in a bike accident? “We’re not going up to that phase in Azhar. I think most importantly it’s about the court case. 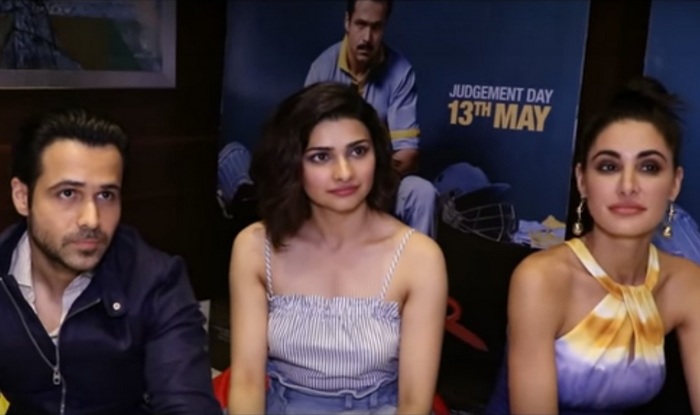 Before correcting herself on kissing Emraan Hashmi on screen, Nargis Fakhri gets talking about playing Sangeeta Bijlani, the Bollywood actress-model who was the “other woman” in Azhar’s life for quite a few years. “I had a really lovely time playing the character of Sangeeta. She’s been in the public life before Azhar…. Well, I really love this character because (through it) we – that is Emraan and I or Azhar and Sangeeta – take you on an emotional ride. When you see an athlete or a movie star, you have an image of them – you don’t think they’re human. But in Azhar, you’ll get to see their human side of these two and Naureen and the situation.” (ALSO SEE: Prachi Desai or Nargis Fakhri: Which Azhar actress looks hotter?)

Emraan also reveals some things about his book The Kiss of Life that he wrote on his little son’s struggle with cancer. Watch video!

Watch Emraan Hashmi, Nargis Fakhri and Prachi Desai in Azhar that releases in theatres on May 13. (WATCH TRAILER: AZHAR)