Bengaluru: The Internet is a strange place. Sometimes, it can make your day and sometimes it can turn your day upside down. Recently, death rumours of music composer and singer Lucky Ali were doing rounds on social media. Although, actor Nafisa Ali slammed the rumours about the singer’s death. She said that he’s doing fine and is spending time with his family at his farmhouse in Bengaluru. Now the singer decided to put the rumours of his demise to rest in a post.Also Read - Darlings Twitter Review: Netizens Laud Alia Bhatt And Shefali Shah For Dark And Stupendous Performance - Check Tweets

He wrote, “Hi Everyone. Just addressing the rumours. I’m alive and well and resting in peace at home. Haha. Hope you all are staying in and staying safe. May God protect us all during this devastating time.” Also Read - Was Katrina Kaif's Instagram Hacked And Who is Camedia Moderatez? Fans Scratch Their Heads!

On Tuesday evening, several tweets and other posts flooded various social media platforms with condolence messages and fake reports of Lucky Ali‘s death. Nafisa first tweeted last night to put a rest to the rumours and wrote, “Lucky is totally well and we were chatting this afternoon. He is on his farm with his family. No Covid. In good health.” (sic) Also Read - Bhaijaan: Salman Khan to Work With World's Smallest Singer Abdu Rozik - Deets Inside 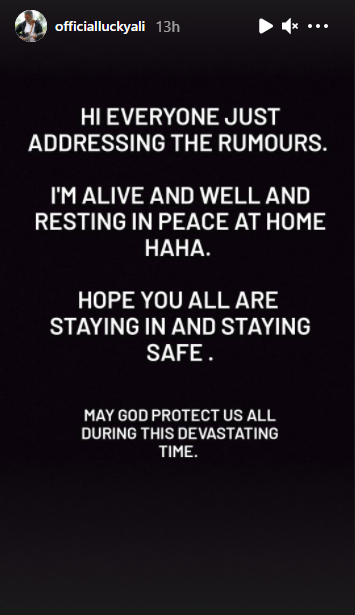 In an interview later, she revealed that she had a conversation with Lucky twice or thrice on Tuesday and he was doing all well. She was quoted as saying, “I chatted with Lucky Ali 2-3 times today. He is fine. He does not have COVID. In fact, he has antibodies. He is busy planning his music and concerts. We were talking about virtual concerts happening and all such things. He is on his farm in Bengaluru and his family is there with him. I just spoke to him, everybody is fine.”

Earlier this year, a video of Lucky Ali crooning to O Sanam in Goa amid a live crowd went viral when Nafisa Ali shared the same on Twitter expressing her love over the kind of soulful music Ali had made in the past.