Check out the first look of M.S.Dhoni- The Untold Story! 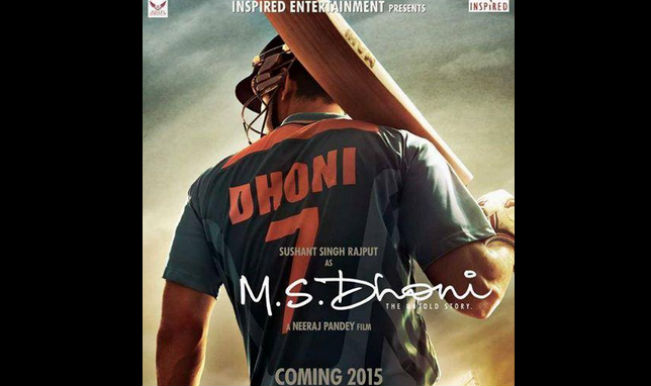 Coming 2015 Sushant Singh Rajput will take over the pitch and bat as Mahendra Singh Dhoni in an upcoming film by A Wednesday fame Neeraj Pandey. The film titled M.S.Dhoni- The Untold Story poster was released today. And the first look of Mahendra Singh Dhoni’s biopic is indeed larger than life depiction of the captain of the Indian national cricket team. Also Read - Rhea Chakraborty's Lawyer Reacts To Sushant Singh Rajput's Lawyer's 'Strangulation' Statement, Says 'Conclusion On Basis of Photos is Dangerous'

The first poster of the movie has Sushant Singh Rajput on the pitch, with his back facing the poster wearing the helmet and the bat rested on his shoulder. He is wearing Dhoni’s jersey with no. 7. Number 7 has always been special for Dhoni, as he was born on July 7 (7/7/1981). The movie will be the most anticipated one for all the cricket fans and definitely people anticipate a commendable work by Sushant Singh Rajput just like his previous projects. Also Read - Bollywood Drug Case: Shraddha Kapoor Confirms Sushant Singh Rajput Used to Take Drugs in Vanity Van Amid Shooting

Earlier the BCCI had made it clear that in no uncertain terms a film can be made on MSD before his retirement. Although a commercially viable movie based on sports drama will get a lot of footfalls, but the makers had decided to comply with BCCI’s objection. But now it seems the BCCI are not anymore holding back the project as long as it does not affect Dhoni’s professional work.

The biopic trend seems to be a hit idea in the B-Town these days. Every other filmmaker is coming up with a biopic. As we know Bollywood is trying its best to depict our country’s unsung heroes from the sports field through celluloid. With movies like Paan Singh Tomar and Bhaag Milkha Bhaag and Mary Kom the tinsel town is bringing sportsmanship qualities of heroes from the sports field to limelight as part biographical movies. This tried and tested way to  churn out a successful hit at the box office seems to be working and the same is encouraging other movie makers.

What do you think of the first look of M.S.Dhoni- The Untold Story?