The actress is on a well-deserved break and is enjoying time off with family. 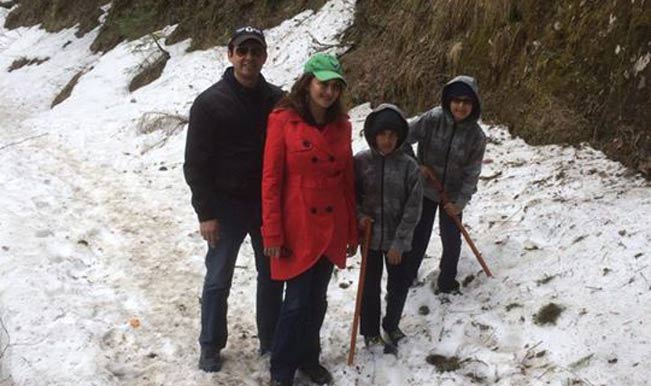 Madhuri Dixit-Nene is on a well-deserved break. After her last film Gulaab Gang met with a mixed response and was declared a flop at the box office, one would’ve expected Mads to sulk in a corner, for a few days at least. Also Read - Himachal Pradesh: 187 People Rescued After Being Stranded in Heavy Snow Near Kufri

But not one to do that, the diva decided to move on from the film’s fate and go trekking in the snowcapped mountains at the foothills of the Himalayas! The actress has shared pictures on her social networking account where she is seen posing with her husband Dr Shriram Nene and sons Arin and Ryan. “Trekking in Shimla. How beautiful!” she says. Also Read - Heavy Snowfall in Himachal Pradesh: Tourists Advised Not to Visit Shimla, Manali

In another post, she shares a lovely picture of hers in the lawns, says, and “Relaxing after a hectic schedule.”

It’s great to see Madhuri on vacation like this, just before her other projects and the new season of Jhalak Dikhhla Jaa take off!