The film will clash with PadMan on January 25.

Last week there was talk that Sanjay Leela Bhansali’s Padmaavat  starring Deepika Padukone, Shahid Kapoor and Ranveer Singh is all set to hit screens on January 25 alongside Akshay Kumar’s PadMan. Though there was talk, the makers hadn’t made an official announcement on their film’s release date until yesterday. Apart from this, the makers also revealed the change in the film’s title after getting a go-ahead from the CBFC. Padmavati is now Padmaavat as suggested by the certification board. After announcing the official release date of the film yesterday, the makers of the period film have made a few clarifications about it which will hopefully put an end to all the drama around the film. (ALSO READ: Will Deepika Padukone’s Ghoomar Song Be Axed From Padmaavat? Exclusive ) Also Read - Cirkus: Ranveer Singh Gets His First Double Role in Rohit Shetty's Film, Jacqueline Fernandez And Pooja Hegde Join in

The makers stated that the film is based on the epic Padmavat by Sufi poet Malik Muhammad Jayasi which is a work of fiction. The makers of Padmaavat also clarified that the film does not have a dream sequence between Alauddin Khilji and Rani Padmavati. The makers also stated that they have made the film as an ode to the famed valour, legacy and courage of Rajputs. Take a look at all the clarifications by the makers in the image below! Also Read - SSR Case-Drugs Probe: NCB Sends Deepika Padukone's Phone And 14 Other Devices to Gujarat For Forensic Testing 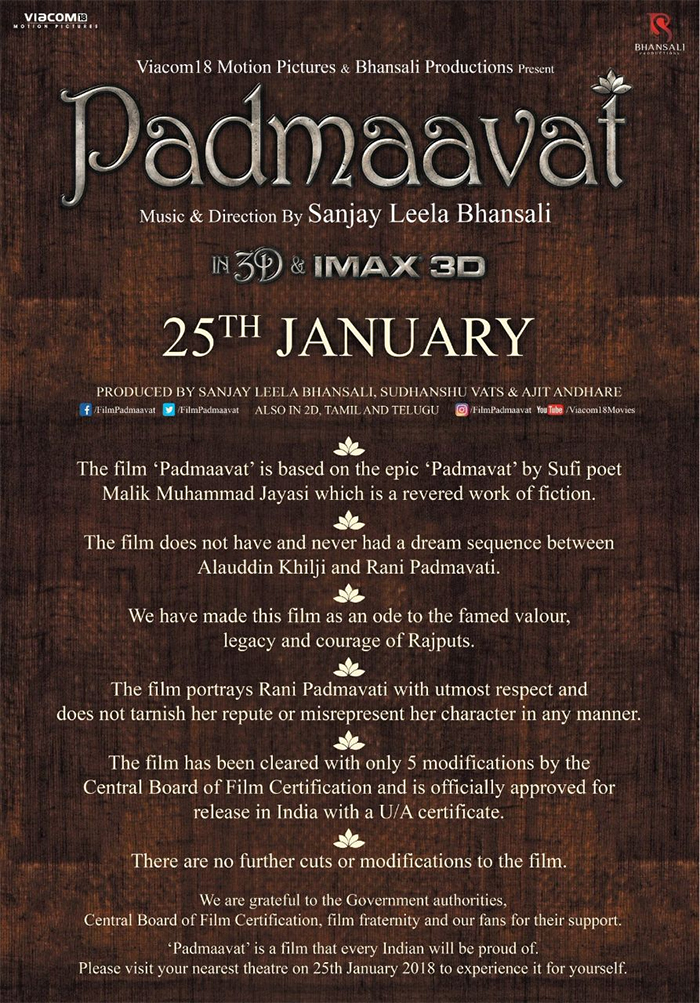 Sanjay Leela Bhansali was recently quoted saying, “Padmaavat is a dream come true for me. I have always been fascinated by the stories of honour, valour and vigour of our great Rajput warriors that have been captured so beautifully in our literature and this movie is my homage to those glorious stories. I would also like to thank the entire film fraternity for supporting Viacom18 and Bhansali Productions through the entire production and pre-release phase and hope they like the film they so supported.”