Oh my god, It’s official now! Actor Malaika Arora just confirmed her rumoured relationship with boyfriend Arjun Kapoor and we are going gaga to see the adorable post along with the picture on Instagram. Though it’s a bit tad late for the occasion of Arjun Kapoor’s birthday but Malaika Arora made it up with her latest post. She wished Arjun with a beyond adorable post along with a hand-in-hand picture.Also Read - Arjun Kapoor Rocks a Moustache And Trimmed Hair Look For His Dark Comedy Kuttey

Malaika Arora, who is currently on a vacation with Arjun in New York, gives major couple goals as they can be seen hand in hand and on the other hand, Arjun looking at her while she’s lovingly leaning onto him. Also Read - Malaika Arora OOPS MOMENT: Malaika Arora's Major Wardrobe Malfunction In A Thigh-High Slit Gown Goes Viral, Checkout Video

Bollywood celebrities like Parineeti Chopra, Dia Mirza, and Sophie Choudry were quick enough to leave sweet comments on the post. 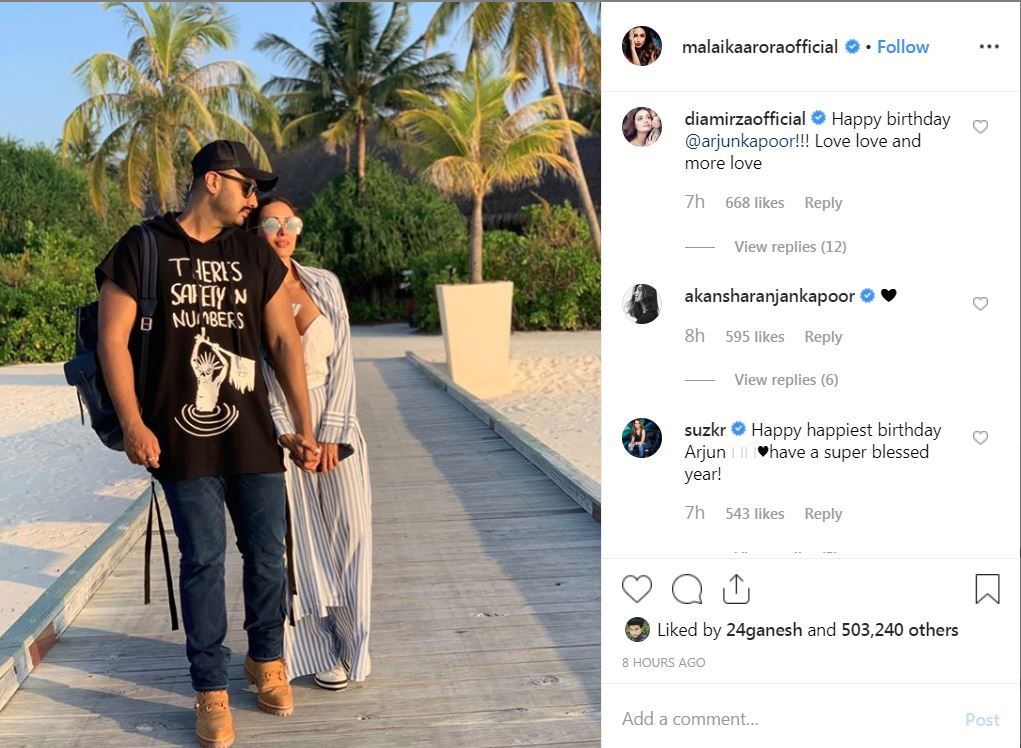 While there have been a lot of speculations around the duo’s wedding, this is the first time that the pair have made their pictures public on social media which will definitely set the internet on fire! Reportedly, Arjun rang in his 34th birthday with Malaika in New York. The couple took off for a romantic holiday on Monday night.

Arjun and Malaika have been in the news due to their rumoured romance. The duo, who initially denied dating each other has been making public appearances together at several events lately.

A few months back, the ‘Tevar’ actor appeared on ‘Koffee with Karan’ with his sister Janhvi Kapoor where the former didn’t shy away from admitting that he is not single. He also opened up about how he wasn’t initially ready for settling down but is now open to marriage.

On the work front, Arjun was last seen in ‘India’s Most Wanted’. The ‘2 States’ actor has two movies in his kitty including ‘Sandeep Aur Pinky Faraar’, and ‘Panipat’, which also stars Sanjay Dutt and Kriti Sanon.

With inputs from ANI