Malaika Arora and her girls partied last night at Bebo’s place. The actor later took to social media to create a frenzy by posting a cute picture of Kareena’s son, Taimur Ali Khan, posing with her grown-up son, Arhaan Khan. The picture was taken in Taimur’s playroom and had Arhaan smiling in the frame with the kid looking at him admiringly. Malaika captioned the post as, “My baby with Bebo’s baby #khanboys♥️ #Timtim” (sic) Also Read - Viral Video: Malaika Arora Lashes Out at Her Driver at The Mumbai Airport For Not Reaching at Pick-up Point

Malaika then took to her Instagram stories to share her own picture from the night. The photo had her, Kareena and Amrita Arora posing along with another friend in the same frame. It seemed like a regular get together as all the girls didn’t look dressed up the way they usually do when they visit each other for house parties. 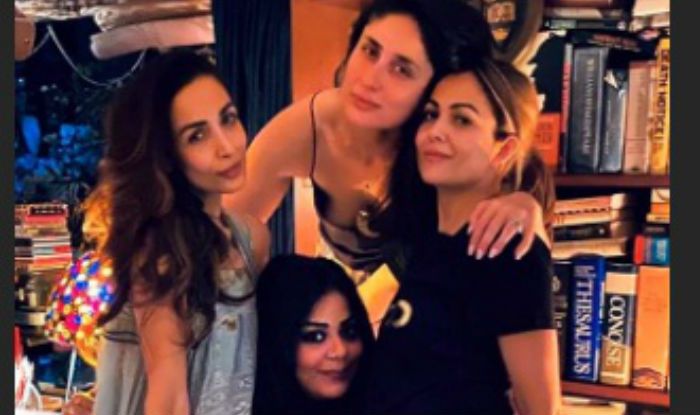 Malaika was joined by her boyfriend Arjun Kapoor at the party. Kareena’s sister, Karisma Kapoor, was also present. However, no pictures of the two are yet out on social media. Both Malaika and Arjun arrived in separate cars and avoided being clicked together by the paparazzi. Amrita, too, posted the same picture in her Instagram stories and cherished the memories of being with her girlfriends.

Kareena, Karisma, Malaika and Amrita are best buddies in Bollywood. It’s been years and their friendship is intact. Both Malaika and Kareena are known to host house parties inviting each other and their other dear friends namely Natasha Poonawalla, Karan Johar and Mallika Bhat among others.